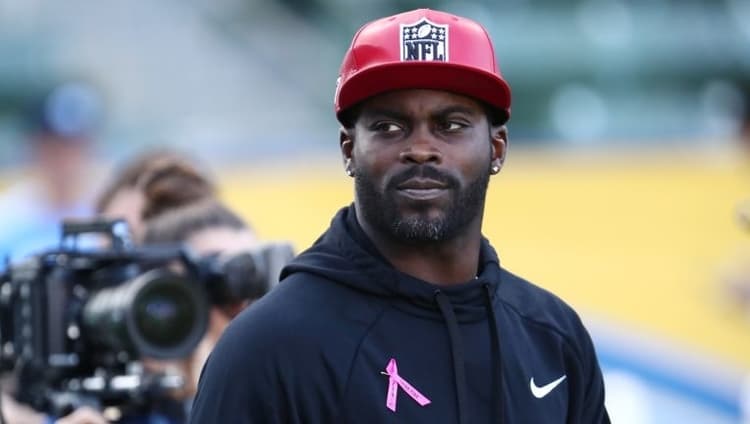 Michael Dwayne Vick or commonly known as Michael Vick, is a former professional American Football Player and NFL analyst for Fox Sports. After making Headlines through his Career in the Football Ground, he was found involved with Dog Fighting, which teared up his Career. He is often called with his nickname as Ookie.

Michael was born on June 26, 1980, at Newport News, Virginia. He is among the four children born to his father, Michael Boddie and Brenda Vick. His father was one of the most significant sources of inspiration for his early success in his Career. What happened to him after NFL? Let's explore more into his personal life.

Father of Four children with his Wife

Michael is the father of four children out of which, three are from his present wife, Kijafa Frink. Vick's one more kid, Mitez was born from his high school girlfriend, Tameka Taylor. He married his long time girlfriend, Kijafa after dating about a decade.

Michael proposed Kijafa on her 29th Birthday in 2009 and exchanged vows in June 2012 at Miami in a $300,000 ceremony. They had two children before their marriage and welcomed their third child, Michael Jr., in November 2017.

The couple met for the first time in 2002 at a Club. After a while, they started dating each other and are still together. Kijafa stood by Vick's life when he went through the Ups and Downs.

Vick got involved in various illegal works from early life, but the most significant set back came in 2007. The cops charged him with conducting Dog Fighting foe entertainment. He was suspended from the football after he accepted the dog fighting conspiracy.

He was sentenced to 23 months in prison. After completing his 19 months in Jail, he was sent to his home for two months in home confinement. He filed for bankruptcy after that, however, the situation turned after returning to the ground. Another such celebrity who went to jail is Chip Hailstone who is still in prison.

When the Football fans came to know about his involvement, they showed their anger as few of his followers went on to send his jersey to the Dogs Center. More than 50 dogs were rescued from the property.

Life After the sentence in Jail

Vick's ultimate goal was to return to the field. So, he was ready to go through everything on his way as he signed with Philadelphia Eagles. There were many protests made over his selection but in 2010, he was able to show his best performance.

Check out the Video of Michael Vick's recount of his prison experiences!!!

He was named the Comeback Player of the year. After that, he did not have much of a good season but was part of some famous games. Michael announced his retirement from football in 2017. After since he joined Fox Broadcasting Company was a studio Analyst for NFL telecasts.

Lately, NFL announced that Michael would serve as one of the 2020 Pro Bowls captains in January. However, many people were against it and filed a petition against it. However, the association kept up with their decision.

How Rich is the former Atlanta Player, Michael Vick?

Michael Vick has a net worth of $15 Million. All of his credits go to this successful in Football. However, he earned more than $200 Million in his career but could not manage his desires. Bradley Roby is another famous American Football Player who has a net worth of $28 Million.

Michael has been earning a handsome amount of money through Fox Channel. He is very much active in social media these days. As of January 31st, 2020, Vick has a total of 1,664,915 Followers in his Instagram account and 2,800,373 Followers in Twitter Account.

Keep Updated With Married Celeb To Know More About Biographies