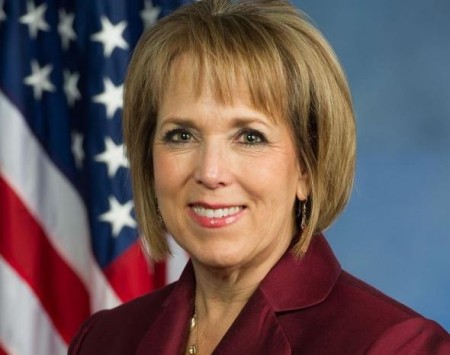 Michelle Lujan Grisham is an American lawyer and politician who has been serving as the 32nd governor of New Mexico since 2019. She is the first Democratic Hispanic woman elected governor and state governor in U.S. history. Previously, she served as the U.S. House of Representatives and Secretary of Health of New Mexico.

Michelle was born to parents, Llewellyn "Buddy" Lujan, and Sonja Lujan. Her father, Buddy, was a dentist, while her mother is a homemaker. Michell also had a sister named, Kimberly who died at age 21. She was diagnosed with a brain tumor at age 2. Michelle also has a brother Gregory, whose name is the same as her late husband's.

Michelle is an Engaged Woman

New Mexico's governor, Michelle, is engaged to a businessman named Manny Cordova. He is the owner/president of Southwest Collision Craftsmen, Inc, located in Albuquerque, New Mexico.

It is not known when the couple first met or when they got engaged. As of now, Michell and her fiance, Manny hasn't married yet. Also, they haven't shared any plans for their wedding. Unlike Grisham, Kim Guadagno, a former governor, is a married woman.

Who was Michelle's first husband?

Michelle was married to her late husband, Gregory Alan Grisham. They were married from 1982 until Gregory died in 2004. Lujan's husband died of a brain aneurysm, a disorder in which weakness in the wall of a cerebral artery or vein causes dilation or ballooning of a blood vessel.

Gregory, a native of Albuquerque, first met Michelle while he was a graduate student at the University of New Mexico. They shared two daughters named, Taylor and Erin Grisham.

In 2007, Michelle, along with her daughters, filed a wrongful death suit against her husband's physicians. As per their death suit, the doctors stated Gregory's illness as migraines. However, Michelle dropped the lawsuit after the necessary information was provided.

Before being a governor, Michelle served in the United States House of Representatives. She also served as the Secretary of Health of New Mexico. She is the first Hispanic woman elected as state governor in American history.