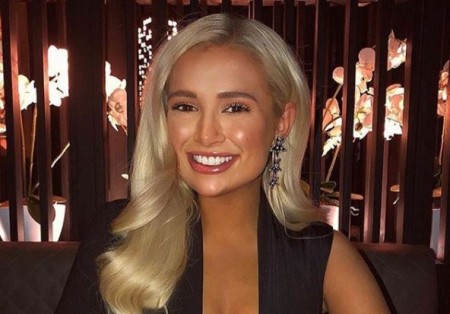 Molly-Mae Hague is an English reality tv star and a social media sensation. She first rose to prominence after appearing in the fifth season of the ITV2 dating reality series, Love Island. Molly and Tommy Fury whom she coupled up in the villa finished as runners-up. They are officially living as partners.

Molly Mae-Hague was born on May 25, 1999, in Hertfordshire, England. She was born to father Stephen Hague and mother, Debbie Gordon. Her parents are no longer together and Debbie is now engaged to her fiance, Jon Rayner. Molly has an older look-alike sister named, Zoe who is a triathlete and works for the military medical corps.

Molly came in late into the Love Island villa but her romance with fellow contestant, Tommy Fury has lived to date. The couple were among the fan-favourite and they finished up second behind Amber Gill and Greg O'Shea. Shortly after leaving the villa, Hague and Fury began living together. Her boyfriend moved into her Manchester apartment in mid-2019.

On July 8, 2020, Tommy wished his girlfriend on the occassion of their first anniversary. Likewise, Molly also shared a sweet picture via Instagram. Further, talking in an interview, the lovely tv star revealed she wants to have a baby at a young age. Meanwhile, former Islander, Olivia Buckland has the exact opposite thinking.

It is not when the lovebirds will get married. Also, they haven't revealed about future wedding plans. At present, both Hague and Fury are successful in their respective careers.

The 21-year-old, Tommy Fury is a British professional boxer, reality star and Instagram sensation. Fury was born on May 7, 1999, in Manchester. He is the half-brother of heavyweight world champion, Tyson Fury.

The 6 feet boxer made his professional debut in December 2018. In late March 2019, he took a break from boxing and appeared in Love Island. Fury has now returned to the ring.

The British influencer has amassed a huge wealth since she departed from the dating show. Molly-Mae has a net worth of $2.58 million as per reports. She is a reality star who has a huge number of followers on social media. Hence, Hague earns from sponsorships, brands promotion, and partnerships.

After Love Island, Molly signed a $647,250 worth deal with popular clothing brand PrettyLittleThing. Her collection titled 'PrettyLittleThing X Molly-Mae', is well received by customers. As per reports, Molly turned down a $453,000 Range Rover deal along with a $103,000 contract for a fashion brand called, Missguided.

The majority of Hague's wealth came from her stunning deal with PrettyLittleThing. In 2020, she and her boyfriend signed an additional $776,700 deal with the Manchester-based fashion company.

Earnings from Endorsements and Social Media

Molly-Mae is a brand ambassador for Beauty Works, a renowned beauty line. Before recommending any products to her followers, Hague tests the products by herself. Talking about social media, she has nearly 5 million Instagram followers and 1.35 million YouTube subscribers as of October 31, 2020.

Molly is the highest Islander to earn a higher amount from Instagram. She earns an impressive $14,000 per sponsored post, while her boyfriend who has 3.1 million Instagram followers earns $12427. The couple currently resides in a $1.68 million flat in Chesire, Manchester.

The influencer is also active in charity works. Following the death of Love Island's presenter, Caroline Flack, Molly donated 100% of the profits to the charity Mind. The organization works for the welfare of patients who has a mental illness. For your information, Caroline died by suicide on February 15, 2020.