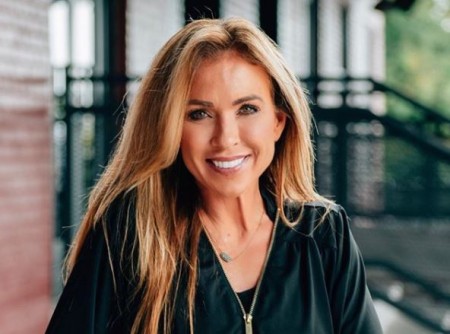 The globally popular dance competition tv series, Dancing with the Stars, is set to air for its 29th season. Among the latest contestants of the show today we will be talking about Monica Aldama. Monica is an American cheerleading coach working for the co-ed cheerleading team at Navarro College in Texas. She appeared in the 2020 Netflix docuseries titled, Cheer.

Monica Holcomb Aldama was born on February 9, 1970, in Texas, the United States. She is 50 years old as of 2020. Aldama is a 14 time NCA Collegiate National Cheer Champion. Talking about her academics, Monica graduated with a Bachelors's degree in Business Finance from The University of Texas, Austin, in 1993. Likewise, she earned a Master's degree in Business Administration and Management from the University of Texas, Tyler, in 1999.

The gorgeous cheerleading coach is a married woman. She has been married a long time to her loving and supportive husband, Chris Aldama. There is not much information on when the couple got hitched. However, Monica once revealed that she tied her knot with Chris after getting her finance degree. It seems that they have been together since the mid-1990s.

Monica and her spouse Chris share two children, son Austin and daughter Ally. The kids go to the same university and are athletes. Ally follows in her mother's footsteps and is a cheerleader at Southern Methodist University. Similarly, Austin plays for the football team.

It is incredible of Aldama as she manages to spend much time with her family despite a busy schedule. The family of four often travels and attends public events together. As per Chris's Instagram, he is a musician and performs in festivals.

How much is Monica's Net Worth?

There is no exact information regarding Aldama's net worth. As a national award-winning cheerleading coach, Monica earns an annual salary of over $43,871. She has been working as the head cheerleading coach at Navarro College since 1995. Therefore, Aldam has nearly 26 years of experience. She might have an estimated net worth of at least $1.5 million.

Monica earns a desirable sum of money from the paid partnership with several brands. Before cheerleading, Monica wanted to work on Wall Street. After earning a finance degree, she became the CEO of a company based in New York. One day she applied for a cheerleading coach job, and the rest is history. Currently, Aldama has won multiple national and world championships.

Recently, it was announced that Monica would be a contestant of the world-renowned tv show, Dancing with the Stars. The show Previously, she appeared in Netflix's docuseries, Cheer. Alan Bersten, the winner of the 28th season of DWTS, has a decent net worth.

Monica's team and her cheerleaders call her an icon and cheerleading queen, which is entirely correct. She led Navarro's team hold the record for the highest score in history at the National Cheerleader's Association (NCA) College Nationals.

Over the past 20 years, Monica's team has won five grand national championships along with 14 NCA National Championships. Further, Aldama was honored as an inductee at the Navarro College Athletic Hall of Fame Inaugural in September 2019.

In 2020, Aldama and her team appeared in the docuseries, Cheer. The show portrayed the difficulties behind being a cheerleader and all that it takes to be as successful as they have been over the years.

Cheer proved to be a huge hit, and it changed the lives of Monica and the rest of the team. They have appeared on "The Ellen DeGeneres Show" and joined Oprah's live tour, catapulting them to stardom.

On September 14, 2020, the 29th season of DWTS will premiere on ABC. Recently, Monica was seen with a professional dancer, Val Chmerkovskiy, fueling speculations that they are partnered up. Val was previously in a relationship with former DWTS champion, Rumer Willis.