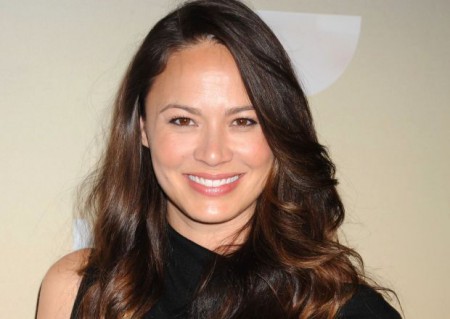 Actresses are known for their stunning beauty and unique on-screen presence. And actress, Moon Bloodgood is not only famous for her beauty, but she is an exceptionally good actor as well. She is an American actress and model known for her roles as Lt. Blair Williams the 2009 film 'Terminator Salvation' and as Anne Glass in the TNT television series 'Falling Skies.'

Korinna Moon Bloodgood was born in 1975, in Alliance, Nebraska, U.S. She celebrates her birthday every 20th of September each year. Therefore coming September 20, 2019, Moon will be 44 years old. Another beautiful actress Spencer Locke also shares the same birthdate as of Bloodgood.

Moon grew up in Anaheim, California. Most of her fans get confused by the surname, Bloodgood. Well, it is actually spelled Bloetgoet and is Dutch.

Moon's father Shell Bloodgood is an American-born citizen and has Dutch, English, Welsh, and Irish ancestry. Meanwhile, her mother Sang Cha is a Korean citizen. The couple met in South Korea where Shell was stationed due to his profession.

The beautiful actress, Moon Bloodgood is a married woman. She is married to Grady Hall, a local children's author. Moon and Grady began dating in 2009, and two years later they married each other.

Moon and her spouse, Grady exchanged their wedding vows on August 2011. The lovebirds have been married for over eight years. Given their long matrimonial solidarity, Moon and Grady haven't been involved in any controversies.

Confusion with another famous Director

Do you know there are many people who are famous and share a similar name? Well, the case is valid for Moon's spouse as well. Her husband is a local children's author. And guess what there is another guy with the same name, and he is famous too.

Another guy we are talking about is Grady Hall, director of commercials and music videos. Further, he is a screenwriter, producer, and director of one-hour television series.

For your information, Grady's high-profile commercial work has earned him numerous industry awards. Also, he has been listed on 50 Best Commercial Directors in World.

The longtime partners Moon and Grady share two children from their marriage. They welcomed a daughter Pepper Hall on December 15, 2012, who will become seven years old in December 2019.

Similarly, the couple welcomed their second child, a son named Archie Hall on December 19, 2015. After adopting parenthood, Moon became less active in the film industry, but she frequently appears on television shows.

Bloodgood is a talented actress, and she has been named one of the sexiest woman in the world. Therefore, her fans become curious to know every little detail about her personal life. However, it seems that Moon is not active on social media, neither she has any accounts.

Meanwhile, Moon's spouse, Grady, use social media occasionally. The couple rarely shares their personal images. Hence, it is difficult to track down their daily updates.

In the past Moon had been in relationships. She dated actor Eric Balfour back in 2004. The former couple was in a serious relationship, having been engaged in 2005. Sadly, their romance ended two years later.

Similarly, the actress/model dated actor Jeffrey Donovan in 2009. They even appeared in the TV series Burn Notice. Unfortunately, the same year they broke up.

The leading actress of the blockbuster movie, Terminator Salvation, Moon Bloodgood, has a net worth of $1 million. She is one of the renowned actresses in Hollywood; hence, her earnings are desirable.

However, with the responsibility of raising two kids, Moon has been less active in the movie industry. She frequently appears on television shows. Some of the model turned actress also has similar net worth like Sunshine Deia Tutt.

From her modeling and acting career, Bloodgood has amassed a significant income. Some of her movies have collected excellent revenue at the Box-Office.

For example, the 2006 survival drama film, Eight Below collected $120.5 million, while the 2009 film, Terminator Salvation collected over $371 million.

Moon sold her House for $2.05 million

The additional details about Bloodgood's properties are unavailable. There is no doubt that she definitely has a luxurious lifestyle.