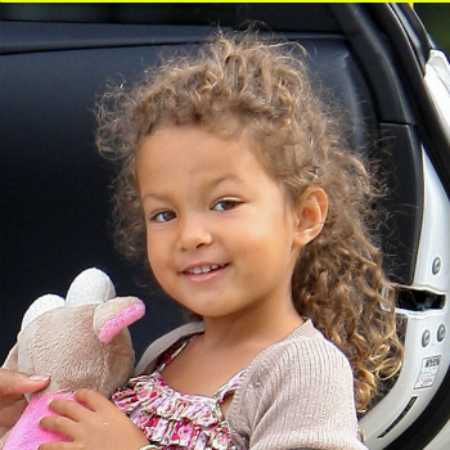 Nahla Ariela Aubry is the daughter of famous American Actress, Halle Marie Berry or commonly known as Halle Berry. Similar to that of those other celebrities kids, Nahla is living a happy and beautiful life along with her mother and half-siblings in Los Angeles.

Nahla Ariela Aubry was born on March 16, 2008, in Los Angeles, California. She is the biological daughter born to Halle Berry and her former partner, Gabriel Aubry. Nahla's mother s a well-known actress and father is a Canadian Model. As of now, Nahla shares a half-brother, Maceo Robert Martinez born in 2013.

As most Nahla is in her teenage years, she focuses on her studies. The 12-year-old celebrity kid is not involved in any sort of relationships, unlike Lola Grace Consuelos. However, Nahla is currently single and is studying in her secondary level.

Halle goes to length to keep her daughter away from the limelight. As of now, Both mother and daughter seem to be single. However, As per some sources, Back in 2017, she was in a relationship with British music producer, Alex Da Kid. Then she broke up soon, and as of now, she is rumoured to be dating, a 20 years old model.

Halle's relationship history starts back form the late 1980s. Hally started dating John Ronan in 1989, who was a dentist in Chicago. The couple date for three years and separated in 1991. After splitting, they had some fights over a money matter.

After this first heartbreak, Nahla tied her knot with basketball player, David Justice on January 1, 1993. They dated each other for almost a year before tying their knot. However, this relationship did not last long, as the couple separated in 1996—the divorce as officially finalised on June 2, 1997.

After the divorce, she found love in Eric Benet and started dating each other. The love birds walked down the aisle on January 24, 2001. Due to their problems, they separated in 2003. The divorce was finalised on January 3, 2005.

By the time, Halle's Second marriage was settled, she was in a formal relationship with her partner, Gabriel Aubry. They welcomed their first baby, Nahla in March 2008. The duo did never get engaged and ended their relationship by the start of 2010.

Then, Halle was in a relationship with Olivier Martinez. They started dating from the end of 2010. In March 2012, they had their engagement and exchanged their vows on July 13, 2013, in France.

The same year, they were blessed with a son. By the end of 2015, they started living separately, and divorce was finalised by December 2016.

How Rich is Nahla Ariela Aubry?

Nahla Ariela Aubry is currently not old enough to get actively involved in economic activities. Similar to other celebrities kids, Leeya Eliana Shapiro and Dwayne Carter III, Nahla is living a lavish and beautiful life on her mother's successful career.

Nahla's mother Halle Berry has a staggering net worth of $80 Million. She credits most of her net worth to her successful career in Hollywood. She was among the highest-earning actress in her prime days.

Berry sold her Hollywood Hills house after she kept it on the market at $3.8 million. Similarly, she also bought a Malibu beach house at $8 million. It is one of the most expensive cribs where she is living with her children.