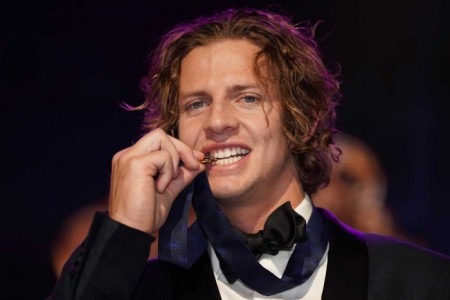 The Fremantle captain, Nat Fyfe won his second Brownlow Medal as the AFL's best and fairest player. The 28-year-old superstar also took home the prestigious award back in 2015. He is serving as the Fremantle captain in the Australian Football League (AFL) since 2017.

On Monday night, Nat polled a career-high 33 votes and became the 15th player in AFL history to win the medal twice on September 23, 2019. Another candidate Patrick Dangerfield finished second with 27 votes and Lachie Neale finishing tied third with 26 along Patrick Cripps.

After getting career-high 33 votes, Nat Fyfe thanked his friends, fans, and his girlfriend, Eleanor (Elli) Brashaw for their support. The superstar skipper spoke about his humble rearing during his acceptance speech.

Among the crowd of his supporters, Nat's girlfriend seemed emotional and fluttered. After his name was announced, Nat leaned forward to kiss his girlfriend.

During his speech, Fyfe praised his girlfriend for her support and love. He said:

“To my partner Elli and her family, thank you very much for everything that you do for me, you keep my feet on the ground. Being the girlfriend of an AFL player is not an easy task... Being a girlfriend to me is not an easy task. But without your support, there’s no way I could be in the position I am in today, so thanks very much.”

Nat's lover is an exercise physiologist who specializes in musculoskeletal rehabilitation. Brashaw has kept herself out of the spotlight despite dating one of the league’s most high profile stars.

The winner of Brownlow medal, Nat and his partner, Elli began dating since January 2016. Further, they were spotted together for the first time at the Hopman Cup.

What Is A Brownlow Medal?

The Brownlow Medal is awarded to the fairest and best player in the Australian Football League (AFL) which is determined by votes cast. It is the most prestigious award for individuals players in AFL and is widely acknowledged as the highest individual honor in the sport of Australian Rules Football.

In 2015, Nat became the first Brownlow Medal winner from Fremantle. He started the 2019 AFL Season in firing form and was considered as one of the favorites to win the Brownlow Medal.

Grand Ceremony At The Crown Palladium

This year's Brownlow ceremony was held at the Crown Palladium in Melbourne. The three-time All-Australian, Nat Fyfe took the medal for the second time on Monday night on September 23, 2019.

All eyes were at the Fremantle captain as he rushed to claim his highest honor. He and Elli both looked stunning. On her Instagram account, Elli shared a picture and expressed her joy with a caption, "How good is that!."

The multiple award-winning athlete, Nat Fyfe enjoys a net worth of $2 million as of 2019. In 2017, he bagged a lucrative six-year contract extension with the Dockers until the end of 2023.

The contract made him one of the AFL’s highest-paid players, with an annual salary of $1.3 million. Throughout his extension, Fyfe will earn over $7 million.

How much he earns per season? Well, average player salaries is around $371,000 per season at the Dockers. Therefore, his earnings might range somewhere between $370,000-$375,000 per season. Just for the information, young American footballer, Shilo Sanders also has similar earnings.

Now, having a giant wealth at a young age is obviously amazing. So, how Nat spends his millions? He loves outdoor activities, such as traveling, camping, touring, and adventures. Fyfe visits different exotic places on his self driving Toyota car.

Besides a fruitful career, the Brownlow medalist also has investments in a few companies. For example, he is a part of the Adelaide- based Pirate Life Brewery. In 2015, he paid less than $100,000 to help launch the boutique beer company.

Also see, Marriedceleb to get all the details of your favorite celebrity!!!