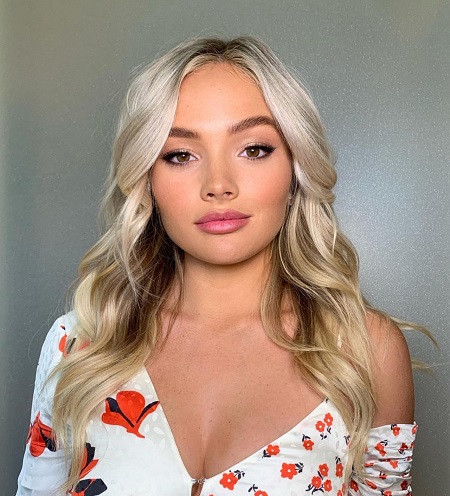 If you are a regular viewer of the American ABC TV series, The Goldbergs? Then Natalie Alyn Lind isn't a new name for you who played the character of Adam's classmate, Dana Caldwell in season 1 to 3 and guest role in season 7. She is an American actress who is famous for portraying as Lauren Strucker in Fox's The Gifted from 2017 to 2019.

She was born on June 21, 1999, in, Los Angeles, California, United States. She is the firstborn or oldest daughter of Film producer, John Lind, and actress, Barbara Alyn Woods. Her younger sisters Emily Alyn Lind, 18, and Alyvia Alyn Lind, 13, are also actresses. So far, she holds American citizenship and belongs to the white ethnicity.

Is Natalie Alyn Lind Dating Anyone?

Yes, the 21 years old actress, Natalie is dating again. As of now, she is in a romantic relationship with her love of life whose name is Jordan Christian Hearn. He is a guitarist.

The pair started dating in 2019 and is still going strong. So, now they seem to be very much in love with eachother. And neither Lind nor Jordan never misses any chance to show their relationship goals with the media.

On September 6, 2019, Alyn Lind posted the snap with her lover, Hearn, for the first time with the caption: "couldn’t smile harder if I tried". Since then, she keeps sharing beautiful pictures with him via Instagram. So, at the current moment, this lovely pair is sparkling their love romance openly without any problems.

Before started dating her current boyfriend Jordan, the 1.65 m tall star was romantically committed with her ex-boyfriend, Aramis Knight. He is an American actor who is known for TV series, Into the Badlands.

They made their relationship public in 2015. But after dating for a few months, the two ended their union in 2016. Aramis, aged 21, also dated an actress, Paris Berelc, the current girlfriend of Jack Griffo.

Net Worth and Earnings Of Natalie Alyn Lind

Since her beginning career in 2006, Natalie has successfully achieved a considerable amount of fortune. As of early 2020, she enjoys the net worth of $3 Million. She credits most of her earnings to her successful acting work.

Similarly, Alyn Lind gets paid $50307 a year for playing different characters in TV shows and movies. Along with this, she might be received a salary of $20,000 per episode for her role in ABC TV series, The Goldbergs.

Further, she played the main role Lauren Strucker in The Gifted from 2017 to 2019. Asides it, she has acted in three movies named Mockingbird, Blood Done Sign My Name, and Kaboom.