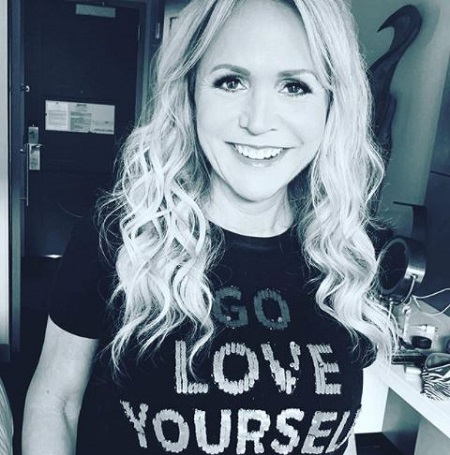 Barbara Alyn Woods is an American actress who came to limelight for her main role Diane Szalinski in TV series, Honey, I Shrunk the Kids from 1997 to 2000. Moreover, she played the role of Deborah Scott on the WB/CW teen drama series One Tree Hill from 2003–2009, and in 2012.

She made her acting debut with the series, Sable in 1988. Let's take a sneak peek of her personal life in the following sections.

Who is Barbara Married?

The 58 years old Woods is a married woman. She tied the knot with her long term husband John Lind, who is an assistant director.

They first met during the shooting of Honey, I Shrunk the Kids: The TV Show in 1997. After two years of love affairs, they exchanged the vows in 1999 in a private ceremony. Since then, both of them successfully balancing their relationship without any problems.

In early 2020, the couple has celebrated 21 years of a marriage anniversary. So far, there have no rumours regarding their extramarital affairs on the media. They moreover frequently appears on the media.

Barbara and her 21 years of husband John are proud parents of three daughters. On June 21, 1999, in, Los Angeles, California, they gave birth to their oldest daughter Natalie Alyn Lind. Now, she is reportedly dating her love of life whose name is Jordan Christian Hearn.

On May 6, 2002, the duo welcomed their second-born daughter Emily Alyn Lind was born. Their youngest daughter Alyvia Alyn Lind was welcomed on July 27, 2007, in North Carolin.

Now, three of them are regarded as well known TV and film actress. Natalie, 21, is an actress who is famous for portraying as Dana Caldwell in American ABC TV series, The Goldbergs. Further, Emily, 18, is famous for her works including Amanda Clarke on Revenge and as Ariel on Code Black.

On the other hand, Alyvia, 13, is known for portraying the character of Faith Newman in The Young and the Restless since 2011.

As of 2020, Barbara Alyn Woods has a whopping estimated net worth of $2.5 million. She has accumulated her fortune throughout her successful career as an actress. Well, she is active in the entertainment industry for over three decades.

To date, she has played various roles in TV series like as Star Trek: The Next Generation, The Golden Girls, One Tree Hil, Desperate Housewives etc. Further, she acted in films such as Circuitry Man, The Waterdance, Flesh and Bone, The Wild Card, and Walk Ride Rodeo.

In 1996, she acted in Demi Moore's film Striptease. And the film grossed $113 million against its $50 million budget. Meanwhile, her older daughter Natalie holds $3 Million worth, which she has earned from her acting career.

Barbara was born on 11 March 1962 in Chicago, Illinois, United States. Her father's name is Allen Woods who works as a salesman while her mother's name is unknown.

So far, Woods studied at Hinsdale South High School and Northern Illinois University in theatre. Further, she holds American citizenship and is of white ethnicity.