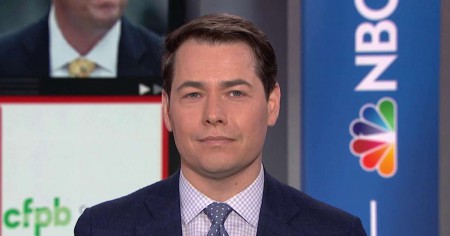 The New York Times is one of the profitable newspaper in the United States. And today we are going to talk about, Nicholas Confessore who currently works as an investigative writer at the times building.

Nicholas won the 2009 Pulitzer Prize for Breaking News Reporting and the 2008 Sigma Delta Chi Award for deadline reporting. In an attempt to quit social media, Nicholas deleted his Instagram account, stating that social media is linked to the pleasure portion of the brain.

Nicholas Francis Alexander Confessore is a political correspondent born on May 17, 1976, in the United States. He grew up in New York City and attended Hunter College High School. As of 2019, he is 43 years old, and his birth sign is Taurus.

He was born to parents Lynda Leonard Confessore and Ralph J. Confessore. His mother is the president of the board of trustee of the Quogue Library. Meanwhile, his father retired as producer and writer of television commercials.

Talking about higher studies, Nicholas graduated with a degree in politics from Princeton University in 1998. While at Princeton, he wrote for the weekly student newspaper, the Nassau Weekly. Do you know his critical stories about social networking company Facebook in 2018 made wild headlines?

Nicholas always had that bug of journalism inside his spirit. He began his professional career from a very young age. At 28, Confessore won the 2003 Livingston Award for national reporting.

He was the member cast of reporters who covered the downfall of New York governor Eliot Spitzer. In 2009, he won the Pulitzer Prize for Breaking News Reporting and the 2008 Sigma Delta Chi Award for deadline reporting.

Confessore shared two Gerald Loeb Awards, one in 2015 for Beat Reporting and another in 2016 for the story "Making Data Visual."

The talented journalist, Nicholas Confessore is a happily married man. He is married to a beautiful woman named Anna Hoffman for over six years. Currently, they reside in New York with a blissful marital relationship. So, how did they meet?

The couple got introduced at a mutual friend's party in August 2011. They had an encounter at the Jane Hotel in New York City. A little more than a year later, Nicholas and Anna decided they would tie the knot. Nicholas asked the question at the top of the Oxo Tower in London.

Nick and Anna married in a seaside ceremony on July 13, 2013, at the Quogue Beach Club in Long Island, New York. They exchanged wedding vows beneath a driftwood chuppah decorated with white and green hydrangeas and garden roses.

After their perfect wedding ceremony, the couple went to France and enjoyed their honeymoon. Additionally, the couple honored a few Jewish traditions, including breaking of the glass.

Who is Anna Hoffman?

Nicholas and Anna welcomed their first child, a baby boy on May 2019. After six years of their marital solidarity, the couple became parents of a beautiful child. However, Anna already has a daughter from her previous relationship.

On May 15, 2019, Twitter was filled with congratulatory tweets with fans giving Confessore sweet replies.

The Pulitzer Prize winner, Mr. Nicholas Confessore has a net worth of $2 million as of 2019. He is a longtime journalist who has over two decades of working experience. The source of his net worth is journalism.

Nicholas has written for the several prestigious magazines like The New York Times Magazine, The Atlantic Monthly, Rolling Stone, the Los Angeles Times, The Boston Globe, Salon.com, and other publications.

He was previously an editor at the Washington Monthly and a staff writer for The American Prospect. He is still active in the journalism industry, hence his earnings will increase more in the coming days.

The above article gave an insight into Nicholas Confessore's personal and professional life. To know more about your favorite star, please follow marriedceleb.com.