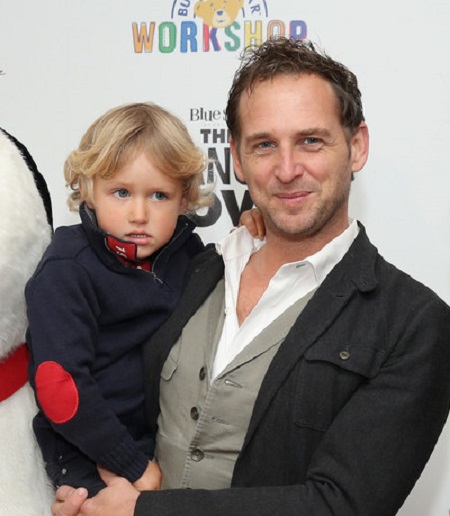 Some kids are lucky enough to get a lavish lifestyle because of their high-profile parents. In a similar context, Noah Rev Maurer who was born with the silver spoon on his mouth. He is famous as the single child of American actor, Josh Lucas and his divorced wife, Jessica Ciencin Henriquez.

Well, Josh is recognised for making appearances on the big screen such as You Can Count On Me (2000), A Beautiful Mind (2001), Life as We Know It (2010), and Ford v Ferrari (2019). While Henriquez is a Colombian-American writer and editor who began working as a freelance writer since January 2009.

The celebrity baby boy Maurer is still young to start a romantic relationship with anyone. So there is no chance of having a girlfriend at the current time.

Eight years old Noah Rev now loves to spend his time with his family. He is enjoying his childhood and is also quite busy focusing on his studies.

Well, aged 35, Jessica Ciencin and Dent Maurer, aged 49, are no more in a marital relationship. They first met at a dog park in 2011. Six weeks later, the lovebirds announced their engagement.

Within a few months, the former spouse on March 17, 2012, in an intimate ceremony. Their big day took place at Central Park among their loved ones. Then, they had come to know about her pregnancy during Jessica's cancer treatment. So they worried about pregnancy but together they had Noah.

Since their divorce, the couple has tried parallel and cooperative parenting and are committed to raising their son. In 2018, the writer penned a column for Time named "Raising My Son With My Ex-Husband Is the Hardest Thing I've Ever Done."

Divorced in 2014 and Tried Reunited In Various Ways

After marrying for less than two years, Ciencin Henriquez filed a divorce petition in January 2014 citing irreconcilable differences. And they finalized their divorce in October 2014. But since then, they have been on and off the relationship.

While originally separated in 2014, they had romantically reunited and slept together many times. So they stated that the couple always tried to coexist multiple times.

But their stuff showed no good results in getting their love back together. Apart from that, the editor was rumoured to be dating an American actor, Adrian Grenier. While Lucas is said to have dated actress, Connie Nielsen.

His Mother, Jessica Accused On Lucas Of Cheating

Yes, the New York Times writer recently accused Lucas of cheating on her.  She twitted the scathing post on Friday, May 29, 2020, saying "Exes are exes for a reason."

She goes on to say: "Thank you for reminding me why I left you first." She also added: "Our son deserves better than this." But the actor Josh has not openly reacted to her cheating accusations.

Yes, the writer Henriquez recently has enjoyed the cosy lunch date with actor, Armie Hammer. On September 07, 2020, they were seen having lunch together on Italian cuisine at Osteria Mamma in Los Angeles.

How Wealthy is Celebrity Kid, Noah?

Meanwhile, Noah has not started his own professional career. Hence, there is no source of income for him. But still, he lives a rich lifestyle being the son of a millionaire's parents, just like Genesis Ali Dean.

Whereas his dad, Josh's net worth stands at $16 million as of early 2020. He has accumulated his total fortune throughout his three decades of acting gigs. He is famous for starring as Jake Broderick in The Mysteries of Laura (2014–2016), and as Young John Dutton in Yellowstone (2018–2019).

On the other hand, his mom, Jessica Ciencin has an estimated net worth of $300 thousand, which she has earned from writing and editing career. Her work has featured in Teen Vogue, Cosmopolitan, New York Times’ Modern Love column, Self Magazine, Time.

When Noah Was Born?

He was born in June 2012 in the United States. His paternal grandparents are Don Maurer and Michele LeFevre.

His aunt is Kate Maurer and his uncle is Devin Maurer. As per his citizenship, he is American and is of white ethnicity.