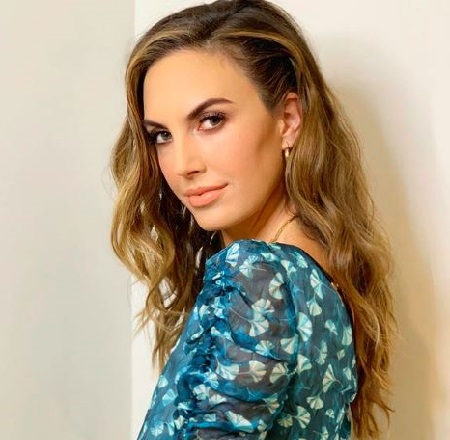 Elizabeth Chambers is an American former model, TV host, journalist, entrepreneur, and television personality who regularly appears on the TODAY Show to host cooking segments. In addition to that, she is famous for hosting programs with CNBC, E! News, NBC, CBS and FOX networks.

Also, she has founded the award-winning BIRD Bakery in 2012 which is located in San Antonio and Dallas, TX. Also, as an actress, she has featured on several TV series and movie such as Rolling Kansas, 2 Broke Girls, Shark, and Criminal Minds. However, she came to limelight after her marriage with actor, Armie Hammer.

Exchanged The Wedding Vows in 2010

After dating for three years, Elizabeth,  37, and Armie, 34, tied the knot on May 22, 2010, in Southern California in an intimate ceremony. The glorious wedding ceremony was surrounded by a large gathering of loved ones and immediate families.

Their wedding was featured in the issue of Town & Country in January 2011. The bride stated on Town & Country in 2013: "When we finally got together, Armie wanted to get married". Recently on May 22, 2020, they even celebrated their 10th marriage anniversary together.

Yes, their relationship has a twist from the beginning. They first met one day when Call Me by Your Name actor had planned for trips with friends in Los Angeles back in 2006.

Their mutual friend even invited Elizabeth to an adventure day. The day, the two first introduced through Armie's friend named Tyler Ramsey an artist. And the actor said it was love, at first sight, saying: “I felt like I’d been knocked over.”

But during that time, the tastemaker had a boyfriend. After their first meeting, they became good friends. But suddenly there came a point where Hummer could not stop his feelings any more.

Then he asked her to break up with her boyfriend saying that he can't be friends with her anymore. Surprisingly, that worked and they began dating in 2008.

During their relationship, Chambers and her bride, Hammer welcomed two little children together. After three years of marriage, they announced that they were expecting their first child together.

Finally, the lovebirds became parents when their daughter Harper Grace Hammer was welcomed on December 1, 2014. She was delivered by a doctor, Jay Goldberg. Three years later, they welcomed their youngest son Ford Douglas Armand Hammer on January 15, 2017.

Now, the couple is enjoying their parenthood happily and are not shy about posting their kiddos pictures on their respective Instagram accounts. They mostly share family photos, various selfies, and pictures from exotic vacations.

Yes, it's over for Elizabeth and Hammer. After 10 years of marriage, they jointly announced the split through their respective Instagrams by sharing a throwback snap of them on July 6, 2020.

On Friday, July 11, 2020, Chambers filed a divorce citing irreconcilable differences in her petition. She requested for primary physical custody of their two children to the court and joint legal custody of two. Also, she asked for spousal support.

Yes, Armie, the son of businessman Michael Armand Hammer recently has enjoyed the cosy lunch date with actor, Jessica Ciencin Henriquez. On September 07, 2020, they were seen having lunch together on Italian cuisine at Osteria Mamma in Los Angeles.

Jessica, the Colombian-American writer and editor, was once married to actor, Josh Lucas from 2012 to 2014. The couple shares eight years old son, Noah Rev Maurer, born in June 2012.

Elizabeth has a whopping net worth of $10 million as of 2020. She has accumulated her worth throughout her career as a journalist, TV personality, and journalist. She is popular for being the judge on the Food Network.

To date, Chambers has worked as a judge on various TV shows Sugar Showdown, Chopped Sweets, and Cupcake Wars. As a guest, she has made appearances on The Tonight Show, The Kitchen, The Chew, etc. Hence, her salary might fall in around $58454 per year as a television host.

Whereas, her now estranged husband, Armie's net worth stands at $16 million. He credits his earnings to his 15 years of successful acting work. He came to fame initially after starring as identical Winklevoss twins in film, The Social Network in 2020.

Know About Her Bio

She was born on August 18, 1982, in San Antonio, Texas, United States. Her father name is Judy Chambers while her mother' name is still under the radar.

Further, Elizabeth has three younger siblings, one sister Catherine, and brothers Joseph and John Chambers. As per her citizenship, she is American and belongs to the White ethnicity. So far, she is a graduate of The University of Texas at Austin.