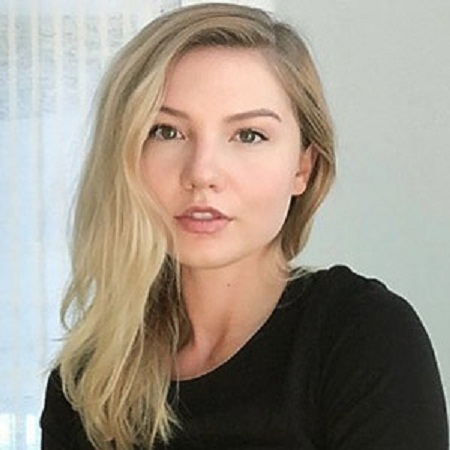 Who is Paige Price?

Paige Price is an American model and golf presenter. She came to limelight after dating a famous American actor as well a musician, Frankie Muniz.

Price was born on 30 March 1992 in Scottsdale, Arizona. She is American by nationality and belongs to white ethnicity. So far details about her parents, siblings and early life are unknown. Likewise, there is not much information about her educational background.

Further at the age of 18, Paige started modeling. In addition, at the age of 21, she won the Miss Classic Kumit and later she won New York City's Link and Laces golf tour.

As mentioned above, Paige is a partner of Frankie Muniz who is mostly known as an American actor, and musician. The couple met each other in Frank Sinatra 100th anniversary invitational in February 2016. After knowing each other the lovebirds began dating in April 2016.

In addition, the American actor proposed Price at the Lantern Festival. After dating for years the couple turned their relationship into the next level and got engaged on 18th November 2018. Their engagement ceremony was held at the Pinal Fairgrounds and Event Center in Casa Grande, Arizona.

Moreover, Paige announced their engagement through her Instagram account. Further, her fans love her love story and happy to see her with her love. In the picture, Price stated that she had a dream of marrying the man of her dreams and the day is near and can't wait to marry her fiance.

Besides, it is the first engagement of Paige but her partner Frankie was already engaged with two women. First, he was engaged to his girlfriend, Jamie, however, they ended their relationship after two years.

After getting separation with his first girlfriend, he began dating Elycia Marie and got engaged in 2011. Nevertheless, the duo failed to manage their relationship so they parted in their way. Moreover, Muniz also dated several other women before meeting Paige.

Though the couple is already engaged they haven't plan to walk in the aisle as of now they are focusing on their career.

Paige Price net worth is estimated to be around $500k as of 2019. She has earned a heavy amount of money through her modeling career. Further Price has become the face of several brands from which he earned a good amount of money.

On another hand, her partner Frankie Muniz's net worth is $40 Million. He earned a heavy amount of money as an American actor, musician, writer, producer, and race-car driver.

Further as an actor Muniz has played in the several movies and TV series which are doing good in the box office.

Despite earning a heavy amount of money, Paige has not revealed the details of her House, Car.

Paige's age is 27 which is similar to Derek Discanio. She stands at the tall height of 5 feet 3 inches and weighs around 45 kg / 99.208 LBS. Being a model she has well managed her body but has not shared any details about her body measurement. Further, she has a pair of grey eye and has blonde hair.