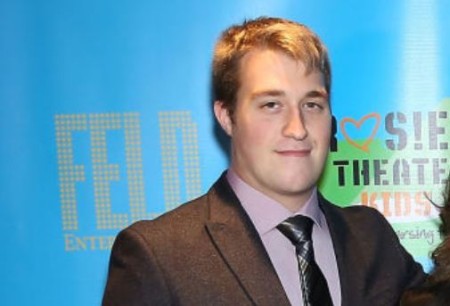 Are you familiar with Rosie O'Donnell who is mostly known for hosting "The Rosie O'Donnell Show?" If yes then you probably know about her personal life as well. Apart from her professional endeavours, she is known for being an outspoken advocate for lesbian rights and gay adoption issues. And today we are going to talk about her first adopted son, Parker O'Donnell.

Parker Jaren O'Donnell was adopted as an infant by Rosie on May 25, 1995. Since an early age, he displayed a strong interest in military history. Parker is now a Marine officer. Additionally, he attended the Academy of Professional Bartending School and became a certified mixologist. He joined the Valley Forge Military Academy in 2011.

Parker's adoptive mother, Rosie has four other children, Chelsea, Blake, Vivienne, and Dakota. All children were either adopted or were born by artificial insemination.

The 25-year-old, Parker O'Donnell is in a relationship with his girlfriend, Hannah Kruh-Vort. The couple began dating in their late teens as Hannah first appeared on Parker's Instagram on November 1, 2014. As of now, Parker and Hannah aren't married yet but they are enjoying their romantic affair.

Parker's girlfriend also 25 is a creative designer based in New York City. An avid traveller and environmentalist, Hannah graduated with an industrial design degree from Pratt Institute. She often appears on her boyfriend's Instagram and Twitter.

The Emmy award-winning personality, Rosie came out as a lesbian in 2002. Two years later, she married her then-girlfriend, Kelli Carpenter on February 26, 2004. Kelli is a former marketing executive for Nickelodeon.

Apart from Parker, Rosie and Kelli adopted two other children, Chelsea Belle O'Donnell (b: 1997), and Blake Christopher O'Donnell, (b: 1999). In 2001, the couple decided to adopt a foster child, Mia (b: 1997) but the state of Florida removed the child from their home.

Later, In 2002, Carpenter gave birth to a daughter, Vivienne Rose O'Donnell through artificial insemination. In 2004, Rosie and Kelli's marriage was annulled by the California Supreme Court and Kelli had moved out of their home in 2007. By 2011, Rosie began dating Michelle Rounds.

Rosie married Michelle in a private ceremony on June 9, 2012. The pair adopted a baby girl, Dakota in January 2013. However, the couple separated in November 2014 and their divorce was finalized in October 2015. Rosie engaged to Massachusetts police officer Elizabeth Rooney in October 2018 but they called off their engagement one year later.

There is not enough information about Parker's net worth. However, he might have an estimated net worth of $200,000. He earns a desirable income being a marine officer.  For your information, the average salary for the US Marine Corps Military Officer is around $95,938 per year. Hence, Parker is earning an impressive sum of money as well as he is living his dream.

Meanwhile, his mother, Rosie has a net worth of $120 million as per celebritynetworth. She earned a vast majority of her wealth from her shows and as a tv host. As per sources, Rosie gets paid an annual salary of $5 million.