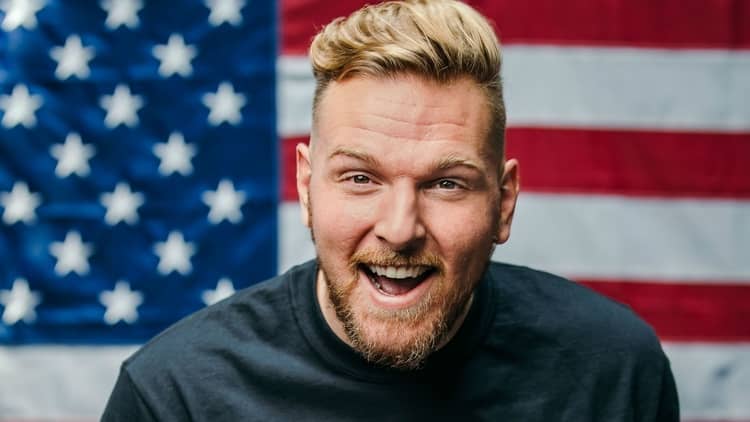 Pat Mcafee, full name Patrick Justin McAfee is a former NFL player who used to play for Indianapolis Colts. On February 2017 he retired from NFL and started work with Barstool Sports, Fox Sports, ESPN, as a sports analyst. He is also a entrepreneur, comedian, and business owner.

Born on May 2, 1987, in Pittsburgh, Pennsylvania, Pat been with Indianapolis Colts from 2009 to 2016 where he considered as the two times winner of Pro Bowl. The former NFL player is in love, who is the girlfriend? Let's explore more into his relationship status.

Who is Pat's Girlfriend?

The NFL star Pat is in a relationship with Samantha Ludy. His girlfriend is an internet celebrity and it is a bit unclear where pat first met Ludy.

So far the lovely couple is engaged but not married. His engagement came in the most Pat Mcafee style after he flew his girlfriend to an isolated island for proposal.

It was February 10, 2019, Mcafee booked a bird and took his girlfriend to an isolated island. Pat purposed his girlfriend Samantha there in front of the waterfall. Before purposing her he went through several kinds of cute obstacles.

Firstly, Pat wants to purpose his girlfriend on her birth on April 2018 but pat's mother stopped him and told him to chose another day. Later on, he became busy in his NFL leagues.

So Pat decided to purpose his future wife on Christmas. And due to some reason on Christmas also he was unable to complete his desire.

Finally, at the end of 2018, he went for a vacation with his girlfriend Samantha on Hawaii. In Hawaii, he hired an expensive helicopter to take them into the unknown island. And on that island under the seemingly beautiful waterfall, he purposed his partner.

Nowadays, the couple is often spotted in different seminars. Recently, Pat took his girlfriend to the super bowl. The duo, however, has not announced any official date for their wedding.

The NFL player Pat is a multi-million dollar man. His estimated net worth is around $13 million whereas another Indiana player Peyton Manning earns around $48 million for six years.

Currently, he's retired from the game but while signing his last career contract with Indianapolis on Mar 7, 2014, he gained $14.5 million.

In addition, obviously the NFL player having a luxurious life through his earnings. He is the lover of branded cars as well as he lives in a lavish house located near Indiana. Besides that, he and his partner are involved in helping abandoned animals through their foundation. Additionally, Pat also helps the military family via his foundation.

For further updates on journalists, stay subscribed to Married Celeb!!!