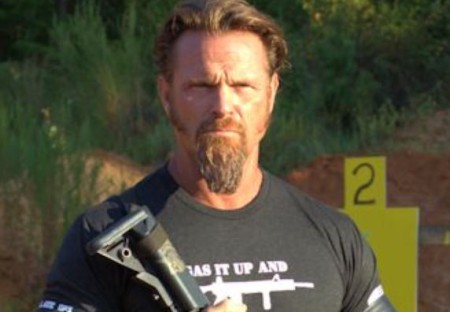 Pat McNamara is a well-known expert on combat and tactical training who spent 22 years in the U.S Army. He spent his first 13 years in 1st Special Forces Operational Detachment-Delta (SFOD)-D. McNamara retired from the Army’s premier hostage rescue unit as a Sergeant Major. Besides being a social media influencer, he is the author of T.A.P.S. (Tactical Application of Practical Shooting).

While working in Special Operations, Pat became an ideal marksman with accurate shooting and tactical effectiveness. He has developed a training methodology and has taught tactical applications of shooting to varsity level soldiers and police officers. So, is Pat as tough in his personal life or is he romantic? Let's know in detail.

The former Delta Force soldier is happily married to his much younger wife, Rebecca McNamara. As per Zola.com, Pat and Rebecca married on May 14, 2016. It is not known when the couple began dating, but as of now, they have been married for over four years. The couple has yet to welcome a child.

Pat's wife, Rebecca works as a hairstylist at the Bamboo Boutique salon in Southern Pines, North Carolina. However, she is Pat's second wife as the retired soldier was previously married. Further, he has children from his past marriage, but McNamara hasn't revealed their identity. Regarding Rebecca's past relationships, she hasn't shared any information.

Pat often speaks about his marriage with Rebecca on social media. He revealed the couple sometimes faces questions regarding their age difference. However, Pat and Rebecca have no problem with the age issue. As Pat was born in 1965, he is 55 years old, while Rebecca seems to be in her early 30s.

Further, the couple has many common interests such as their love for heavy metal, combat, tattoos, and adventure. Pat is a talented musician, graphic artist, and a fisherman too. Additionally, Rebecca is often seen mimicking her husband on Instagram. We can say that the pair has a bit of humor in their life as well.

There is no exact figurative information about McNamara's net worth and income. As per sources, the average salary for Special Operations Delta officers ranges somewhere between $64,342-$73,983 per year. Also, the soldiers are expected to earn a lifetime sum of around $3 million. Therefore, Pat who spent 22 years in the U.S Army might have amassed a decent wealth. He has also appeared on Joe Rogan's podcast.

After retiring, McNamara founded his own training and fitness company, Tactics-Marksmanship-Adventure-Concepts-Security (TMACS). Also, he developed an effective training methodology and has provided courses on tactical applications. Some of the renowned U.S military veterans are Tammy Duckworth and Martha McSally.

Besides, Pat is the author of two books. He is a social media personality who has 453k followers on Instagram and 133k subscribers on YouTube. It seems Pat has a love for automobiles as he has a number of beautiful rides including a 1965 Pontiac GTO and a Toyota Tundra.