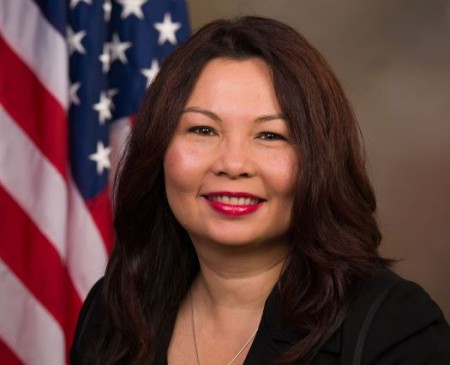 Lucky are those who believe in themselves, even in a situation when there seems to be no hope. And former lieutenant colonel, Tammy Duckworth, through her passion, has gone on to become an inspiration for millions of women across the world. She is currently serving as the junior United States Senator from Illinois since 2017.

Tammy is a member of the Democratic Party and is a former U.S House of Representatives of Illinois's 8th district. In 2004, she suffered severe combat wounds and lost both of her legs while serving as a U.S Army helicopter pilot in Iraq.

Ladda Tammy Duckworth was born on March 12, 1968, in Bangkok, Thailand. She is 52 years old as of 2020. Her father, Franklin Duckworth, an American citizen, served as a U.S Army and U.S Marine Corps. Meanwhile, her mother, Lamai Sompornpairin, a Thai-Chinese, was originally from Chiang Mai. She has a brother named, Thomas who served in the U.S. Coast Guard for eight years.

Tammy graduated with a B.A in political science from the University of Hawaii. She earned a M.A in international affairs from George Washington University. Further, Tammy got her Ph.D. in human services from Capella University in 2015. Besides English, she is fluent in Thai and Indonesian.

Tammy has been married to her husband, Bryan Bowlsbey, since 1993. The couple first met as ROTC cadets in the early 90s while attending George Washington University. Upon their first meeting, Tammy recalled Bryan made a bad impression, and she didn't like him. He made an offensive comment about the role of women in the Army but later apologized.

After dating for a while, the couple exchanged their wedding vows. They welcomed their first daughter, Abigail, in 2014. Similarly, their second daughter, Maile, was born in 2018. Maile was named after Bryan’s great aunt, who was a nurse in World War II.

After having Maile, Duckworth became the first U.S. Senator to have a child while serving. Also, the rules were changed in the senate office so senators could bring a child under one-year-old onto the Senate floor.

Bryan graduated in 2000 with a Bachelor’s degree in Military History from the University of Maryland at College Park. He received his Master’s Degree in IT Management from Webster University in 2012. Both Bryan and Tammy have retired from the National Guard.

Bryan is currently a captain in the Illinois National Guard. He was also the Engineering Lead for Service Design and the Brand Chief Joint Information Exchange Environment at ARNG J6. In addition to his military service, he’s managed security services for AT&T and is the JRSS Migration Manager at VAE, Inc at the National Bureau.

Tammy has a few investments in different companies worth over $200,000. On average, the United States senator's salary ranges somewhere between $152,000-$179,000. Additionally, they receive extra earnings from outside, including sponsorships and campaign funds.

Military Service: How she lost both her legs?

Tammy comes from a family of military veterans. Her direct ancestors served in county militias during the French and Indian War. Also, two of her fifth great grandfathers served for the Continental Army during the American Revolution.

Tammy lost both her legs while serving in Iraq

In 1990, Tammy joined the Army Reserve Officers' Training Corps and became a commissioned officer in 1992. One incident in 2004 changed her entire life when she was deployed to Iraq. She was co-piloting a Black Hawk helicopter, which was then hit by a grenade fired by Iraqi insurgents. Tammy suffered severe wounds and lost both of her legs.

Duckworth is the first female double amputee, the first Senator to give birth while serving in office, the first woman with a disability in the Senate, and the first Asian-American woman elected from Illinois. Another junior senator, Martha McSally, is also a former U.S Air Force pilot.

Recently, on the final night of the Democratic National Convention, Tammy commented President Donald Trump as a coward in chief.