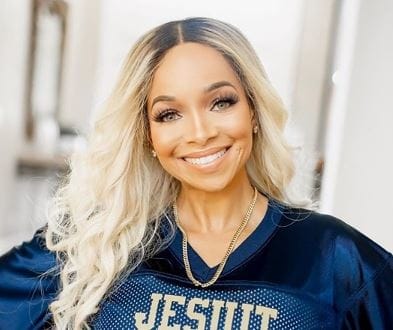 The former Miss Virginia USA, Patricia Southall is one of the known names in the heart of millions of fans. Her name and fame even grew stronger after exchanging nuptial knots with the former football star, Emmitt Smith.

The gorgeous Pat was born on 17th December 1970 in the city of Chesapeake, Virginia. She received her graduation in journalism from James Madison University. After winning the title of Miss Virginia USA she headed for the title of Miss USA 1994 Pageant by representing Virginia, where she stood in first runner-up to Lu Parker of South Carolina.

Pat and Emmitt Smith's love life started back in 1998. The pair bounding grew so much stronger within a few visits which led them to start dating each other.

After dating for almost two years, the pair decided to take their relationship to the nuptial. The great lovers exchanged wedding vows on April 22, 2000 in front of their family, friends and some of the top personalities of the NFL were also invited.

The lovely duo has been married for 20 years as of now. In this marital duration, the pair are blessed with three kids. Their eldest son, Emmitt James Smith IV was born on May 15, 2000, who is now 18 years old and enjoying his college and is very actively playing football for Stanford.

On 15th October 2003 the pair are blessed with daughter Skylar Smith, As of now she is 17 years old and is enjoying her college days. Similarly, their youngest son Elijah Alexander James Smith was born on 22nd September 2010.

Furthermore, both Pat and Smith have each child from their previous relationship and are now parenting five wonderful kids. Being one of the busiest personalities, they are still taking very much good care of their kids and are often seen hanging out with them.

The beauty queen has previously exchanged her wedding vows to actor-comedian, Martin Lawrence back in 1995. Their paths crossed in the summer of 1992 while Martin was appearing in Richmond at a Def Comedy Jam Concert and on the other hand, Pat was working in Governor L. Douglas Wilder's media office.

Within a first met, they immediately fall for each other and started dating and later tied in the marital relationship. The couple only enjoys two years of nuptial relationship and later divorced in 1997, however, they were together for five years.

Though their relationship didn't last forever they actually share one child together from their marriage. Their daughter Jasmine Page Lawrence was born on 15th January 1996 is currently 24 years old has completed her college years.

As of now, Pat is happily married to her husband while Martin is again divorced from his second wife, Shamicka Gibbs with whom he walks the aisle in 2010.

Southall has an estimated fortune of $500,000, which is one of the iconic personalities her net worth surely is in good number. Apart from that, she is the ex-Miss Virginia and famous footballer's wife.

Furthermore, she is the CEO of PatSmith and spokesperson and founder of Treasure You. Her talent has led her to be an author and has published a book titled Second Chance, which price is $9.84 in the Amazon. Currently, she living a very lavish lifestyle with her husband and kids.

The retired professional footballer has a net worth of $18 Million without a doubt he has accumulated all of his fortunes through his outstanding career records.

The ex-husband is the moneymaker

Pat's ex-husband Lawrence is one of the known stand-up comedian and actor. Due to his great talent, he has been featured in many movies and series. Currently, he holds a fortune of $110 Million and is living a lavish lifestyle.

Furthermore, his starred movie Bad Boys collected the $141.4 Million worldwide under the Budget of $19 Million. Similarly, another hit film Wild Hogs amassed $253.6 Million worldwide around the budget of $60 Million. His great roles in the following movies have surely lead him to receive a very good amount of paycheck.