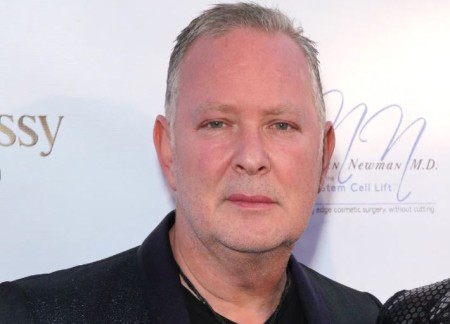 Paul Kemsley is one of those individuals who is renowned in both sports and media world. The English businessman is a property developer and a former Vice-Chairman of Premier League football club, Tottenham Hotspur.

Currently, Kemsley serves as the chairman of a soccer club called New York Cosmos. Further, he is also a talent manager and founder of the NIxxi Entertainment Agency.

Married to a Fashion Designer

The 53-year-old Kemsley is married to an American fashion designer, Dorit Lemel Kemsley. Their marriage ceremony took place on March 7, 2015, at Rainbow Room in New York. They have been married for over five years.

Paul's wife, Dorit, is a television personality who became famous after appearing in the 7th season of The Real Housewives of Beverly Hills. So, when did they meet?

The couple first met in New York through mutual friends. Paul invited his future wife for a date, but she declined. However, Dorit later changed her mind and went with him. Since then, the two have been inseparable.

The London native, Paul, worked in Los Angeles while he met Dorit. However, the couple chose New York for their wedding location. After surveying over ten venues, they visited Rainbow Room.

The wedding was held in a warm and spiritual traditional Jewish ceremony. The couple exchanged their wedding vows in front of their family and friends.

They went to Bora Bora for the honeymoon, but a hurricane occurred on the island, and the pair moved to Anguilla. Do you know Paul (53) and Dorit (44) have nine years of an age gap?

The couple welcomed their first child, a son named, Jagger Kemsley in 2014 before the marriage. Similarly, their second kid, a daughter, Phoenix Kemsley, was born on February 24, 2016.

Recently for Paul's 53rd birthday, Dorit threw him a trip vacation. The couple went for a vacation to Cabo San Lucas, Mexico, along with their kids and friends. Fans slammed Dorit after she posted a video of her children getting sprayed in the face by a sunscreen machine.

In early 2020, there were rumors regarding Paul and Dorit getting a divorce. However, the RHOBH star appeared in an interview with Andy Cohen and claimed the rumors were false.

In February, when the rumors first became public, the couple released a statement in Page Six, stating that divorce was far from the chart. Also, the parents of two said they are very happy with their marriage.

Paul has been married twice. His first wife was Loretta Gold, a Portsmouth native. They have three children named Atlanta, Tatum, and Daniel Kemsley.

On the other hand, Paul's current wife was also in a long-term relationship in the past. Dorit revealed through the show that she was in a ten-year relationship with an Italian man named Antonio.

The businessman and his reality star wife has a combined net worth of $50 million as per celebritynetworth. The couple earns a majority of their income as Bravo TV's cast and their other business ventures.

Paul currently owns a company called Nixxi Entertainment agency. Also, he is a chairman of a soccer team called New York Cosmos. He has earned a hefty sum of wealth as a real estate developer too.

Meanwhile, Paul's wife, Dorit, is a lingerie designer and owns a swimwear company in Italy. She reportedly makes $100,000 per episode from starring in The Real Housewives of Beverly Hills. The show includes celebrities as Denise Richards, Kyle Richards, Lisa Vanderpump, among others.

Paul and his wife, Dorit, are no strangers to lawsuits, bankruptcy, and alleged shady business pursuits. In 2019 Paul was ordered to show up to court with his bank statements after not being able to pay his $1.2 million debt.

As per sources, paul still owes the money to a man named Nicos Kirzis. He accused Kemsley of not paying a single cent and trying to clear the debt in bankruptcy.

Further, in 2018, a U.K. based company, AR Legal Collections Ltd., filed a lawsuit against Paul over an alleged $75,000 sports betting debt. In 2019, Paul won the legal battle, and the case was dismissed.

In August 2019, Paul and his wife purchased a mansion in Los Angeles for $6.475 million. The 9,000 sq.ft. modern farmhouse style mansion has six bedrooms and ten bathrooms. But just after a year of the purchase, the couple listed their beloved house for $9.5 million in September 2020.

Paul Zeital Kemsley was born on August 17, 1967, in Stanmore, United Kingdom. He studied at Atholl School but at 17, left the school, and began working at Gross Fine as a junior surveyor.

From 1985-1992, Kemsley worked as an agent at Ross Jaye, a commercial real-estate firm. Around 1995, he co-founded a property and securities company called Rock Joint Ventures Ltd.