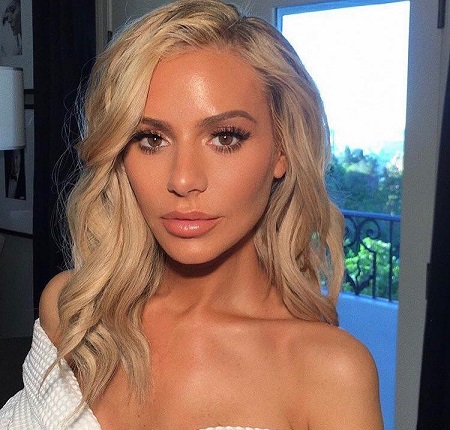 Originally from Woodbridge, Dorit Kemsley is an American fashion designer, entrepreneur, and TV personality. She gained immense popularity after starring as the main contestant on reality television series The Real Housewives of Beverly Hills in 7th season in 2016. It was premiered on October 14, 2010, on Bravo.

Dorit has founded her own swimwear company, Dorit which is located in Italy. It mainly concentrates in swimwear and Italian resort wear. Recently in 2017, she designed her roots and launched Beverly Beach by Dorit in Los Angeles.

Yes, the beautiful fashion designer, Dorit, 44, is officially off the market. She is happily married to an English businessman, Paul Kemsley who is nine years senior to her.

The couple first met while living in the Big Apple. After enjoying their love romance for a few times, they exchanged the wedding vows in March 2015 at a lavish wedding in New York City. Their big day took place in their closest friends and family.

On March 8, 2020, Dorit and her groom, Paul just celebrated their fifth wedding anniversary. They shared their pictures and video from their wedding on their respective Instagram post. The reality TV star captioned: "Happy anniversary to my endless love".

She continues saying that she can’t wait to spend the rest of her life with him. On the other hand, Paul stated: "My greatest achievement was persuading you to marry me".

Who is Paul Kemsley?

Born on August 17, 1967, Kemsley is a businessman who is famous for working as the Vice-Chairman of Premier League football club Tottenham Hotspur. Also, he worked as a chairman of the revived New York Cosmos.

Now, he serves as a talent manager and is an owner of Nixxi Entertainment agency where he manages famous clients, including Boy George.

From their beautiful marriage, Mrs and Mr Kemsley shares two children and are enjoying their parenthood happily. They first welcomed their firstborn son Jagger Kemsley in 2014 before their marriage. Now, he is now a kindergartner.

Their youngest daughter Phoenix Kemsley was born on February 24 2016. Recently in 2020, she celebrates her 4th birthday. At the current moment, both son and daughter are growing up too fast.

Further, Dorit is a stepmother of three kids Atlanta, Tatum, and Daniel Kemsley from her husband, Paul's side. He was once married to his first wife, Loretta Gold from Portsmouth. During their togetherness, they used to live Radlett, Hertfordshire until 2007.

She is a Millionaire

As of early 2020, Dorit Kemsley has an impressive net worth of $50 Million. But that's a combined worth with her husband, Paul. She has built her total fortune from her own successful career as a fashion designer, TV personality and entrepreneur.

As per her salary, Kemsley reportedly brings home $100,000 per episode from MVP of The Real Housewives of Beverly Hills. While Portia Umansky's mother, Kyle Richards makes $270,000 per season. The cast of members of the show includes Lisa Vanderpump, Erika Jayne, Denise Richards, etc.

Besides it, Dorit and Paul Kemsley listed their Beverly Hills mansion for $7.5 million. But it was listed for $12.85 million previously. In August 2019, the couple paid $6.5 million for their Los Angeles home in the Encino area and listed it for $9.495 million in 2020.

After graduation, she left the hometown to pursue her travelling dream at 19. Then she finally began working at Dori, a global swimwear company in Italy. But she flew to New York City in 2009, after working for a decade.

Dorit later founded Dorit International. It concentrates on women's high-quality, comfortable, and stylish swimwear. Apart from that, she's an active philanthropist and a supporter of Safe Kids, a non-profit organization.

Regarding her education, she attended the Quinnipiac University in Hamden, Connecticut. From there, she completed her graduation in Marketing, Design, and Communication with a Bachelor's degree. So, she holds American citizenship and belongs to the Caucasian ethnicity.