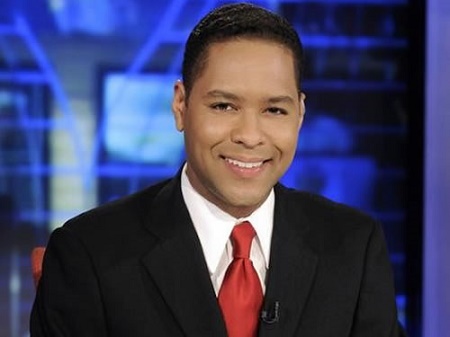 Rob Nelson is a retired American Journalist and News Reporter who has worked for nearly two decades in the field of journalism. He is famous for working as co-anchor of World News Now and America This Morning, and as Anchor of WABC-TV.

He was born on June 5, 1978, in New Jersey, United States. He holds American citizenship and belongs to the African-American ethnicity. Regarding his education, he graduated from the University of North Carolina at Chapel Hill.

Who is Rob Nelson Wife?

The weekend news anchor is happily married to his love of life whose name is Jenny Hurwitz. The lover turned to life partner tied the wedding knot in the presence of their family and friends.

But the married couple stays quiet when it comes to exposing the date and details of their wedding to the media. Today, Rob and Jenny are believed to be enjoying their conjugal relationship with no sign of divorce.

During their union, Nelson and his wife Hurwitz are blessed with one son name Gabe Nelson. They welcomed their firstborn little baby on 30th January 2020. Likewise, Rob first announced that he and his partner Jenny were expecting in October.

Is He Quits his Reporting Job?

Nelson became a morning anchor for WWL-TV in June 2007, after working seven years for New Orleans newspaper The Times-Picayune. He became co-anchor of the ABC overnight news program World News Now and America This Morning on 7 July 2010.

In January 2014, Rob joined WABC-TV from New York City as co-anchor of the weekend morning newscasts, succeeding Phil Lipof. But, after six years with the station, he revealed he 'd leave the ABC 7 in New York on February 24, 2020, to pursue other opportunities.

He shared his resignation letter via Twitter on Monday, explaining that it “feels like the right time” to move on from his current position. In the letter, he said he had the pleasure of working with all of the weekend morning warriors, saying "thank you for everything". He also wrote. "I wish you and the show continued success".

Meanwhile, the net worth of Rob Nelson has not yet been estimated but it is believed to be over $1 million. A long experience in the broadcasting industry for nearly two decades has led him to accumulate a good amount of remuneration.

Other television journalists like Alanna Sarabia and Lara Spencer also earned a good sum from their news reporting career paths. In the United States of America, a journalist's average wage is $40,536 per annum, as per Payscale. Hence, he could earn the same salary annually. He has worked on several television news outlets including ABC News that paid him extra money.

Throughout his anchoring works, Nelson has received awards from organizations including the Society of Professional Journalists,  the New Orleans Press Club, the Louisiana Press Association, and the Black Journalists' National Association.