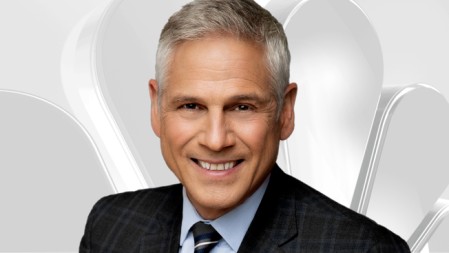 Rob Stafford is a famous American Television Anchor and a former correspondent for NBC's Dateline NBC news magazine. He works in Chicago for the WMAQ-TV. He has been working in the Industry for more than three decades.

Rob Stafford was born as Robert R. Stafford on December 15, 1958, in New Hampshire. Information about his parents is still under investigation. In addition, He has not mentioned his siblings and early life with the media. Rob graduated from Macalester College with a Bachelors Degree in political science and journalism.

Rob Stafford is living a happy married life with his wife. Rob is married to his girlfriend turned wife, Lisa Stafford. They had been dating for sometime before tying their wedding knot. Nothing much about their first meeting is known to the media.

There is not much exact information about the wedding ceremony. Only a few members from both the families and some close friends attended the ceremony. The love birds have been married for more than three decades.

There have been no rumors of the couple separating any time soon. Both of them seem to be very much supportive of each other. Stafford was diagnosed with a rare blood disorder, amyloidosis in 2017 and was treat well in short time.

Father of a Daughter

Yes, You read that. It is a matter of the fact that Rob is the father of a daughter. Like that of other Television personal Stafford is very much private about his life. Soon after their wedding, the love was blessed with a daughter, Addy.

Addy is a rising American actress. She currently resides in Hinsdale, Illinois. Both of her parents are very much supportive of each other. She will be making her parents proud one day.

Rob Stafford has an estimated net worth of more than $2 Million. He has accumulated most of his net worth through his successful career. Rob has been in the industry for more than three decades. Rob worked with Allison Rosati, a Journalist and a co-anchor for WMAQ-TV in Chicago, and has a net worth of $3 Million.

Rob has been awarded several awards for her contributions in the Journalism industry. Stafford won two national news Emmy awards. He also won the Edward R. Murrow award in 2000 for his Dateline investigation into racial profiling.

After graduating from the University, Stafford began his career as a reporter and anchor for KBJR-TV in Duluth, Minnesota. He then became a morning news anchor and an investigative reporter at WFTV-TV in Orlando, Florida. During his four years at WBBM-TV, he also worked as a fill-in anchor.

Rob joined NBC's Dateline NBC news magazine show in 1996. He worked as a Chicago-based correspondent for the news magazine program for almost 11 years and was fired in 2006 in a cost-cutting move. He then joined WMAQ-TV and has been with it ever since.

To read more Biographies and Gossips on journalists, stay subscribed to Married Celeb!!!