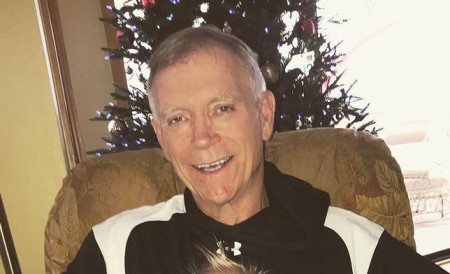 Robert Luke Yunaska is best known as the father of Lara Trump. His daughter is married to Eric Trump, the youngest child of Donald Trump (45th President of the USA), and his ex-wife, Ivana Trump. Hence, Robert is Eric's father-in-law and Donald's co-father-in-law.

Robert was born on December 27, 1946, in the United States. There is no information about his family background. It is known Robert's occupation was of a boat manufacturer. He worked as a plant manager for Westsail in Wilmington, North Carolina. Yunaska is mostly known because of his daughter's high-profile marriage with Eric.

The 74-year-old, Robert Luke Yunaska's longtime wife is Linda Ann Sykes. On May 9, 2020, their daughter Lara Trump posted warm wishes on the occasion of her parents' 40th wedding anniversary on her official Instagram post saying, "40 years ago today, these two said “I do” and I sure am happy they did! Happy Anniversary mom & dad."

Robert's son, Kyle was born in July 1984. He works as the deputy chief of staff at NASA headquarters. Previously, Kyle was the chief of staff for the Department of Energy, Office of Energy Policy and Systems Analysis. He was once listed as Washington's hottest bachelor's in 2013.

On their wedding day, Lara wore two stunning designer gowns. Additionally, she looked gorgeous with jewelry from her sister-in-law Ivanka's collection including her wedding ring. Ivanka served as a bridesmaid while her daughter, Arabella was a flower girl. Further, Ivanka's husband, Jared Kushner officiated the wedding.

Lara first met her future husband around 2008 when they were hanging out with friends. However, Eric took her out on a date three months later. In July 2013, they got engaged and after a year got married.

Lara shares pictures via social media, where her kids can be seen enjoying some quality time with their maternal grandparents.

There is no exact information about Robert's net worth. During his early career, Yunaska worked as a boat manufacturer. Also, he owned a Westsail plant in Wilmington, North Carolina. On the other hand, his daughter has an impressive net worth of $10 million. She worked as a story coordinator and associate producer for the tv program, Inside Edition.

Further, Lara previously worked as a personal trainer and briefly owned her own business, called Lara Lea Confections. She became a senior adviser for her father-in-law's 2020 re-election campaign. Her husband, Eric has an estimated net worth of $300 million as per celebrity net worth.