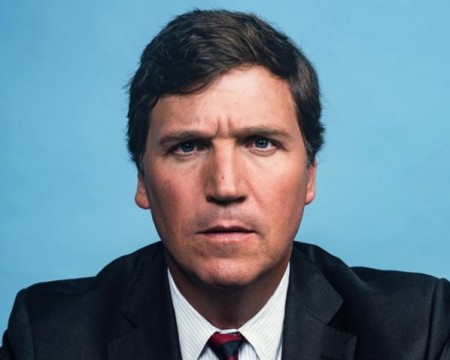 Among the few prominent journalists, Tucker Carlson is a name we must not forget. An American television presenter, political commentator, author, and columnist, Carlson is one of the recognizable faces in television. He is best known as the host of a nightly political talk show, Tucker Carlson Tonight, on Fox News. Previously, he worked for CNN and MSNBC.

Tucker began his career in the 1990s, and currently, his show has gone on to become one of the most-watched political talk shows on television. Let's be familiar with Carlson's personal and professional life.

Tucker Swanson McNear Carlson was born on May 16, 1969, in San Francisco, California, the United States. He is 51 years old as of 2020. Carlson has a mixed ancestry of Swedish, English, German, Scottish, and Irish.

His father, Richard Warner Carlson, is a former director of the Voice of America. A former journalist, Richard has worked as a newspaper service reporter, a magazine writer, a T.V. and radio correspondent, and a documentary filmmaker.

Tucker's mother, Lisa McNear Lombardi, was an artist. She left the family when Tucker was six. He has a younger brother named Buckley Peck Carlson. After divorce with Lisa, Robert married divorcee Patricia Caroline Swanson, an heiress to Swanson Enterprises. Talking about Carlson's educational history, he graduated with a B.A. in history from Trinity College in 1991.

Who is Tucker Carlson's Wife?

The television personality has been married to his longtime wife, Susan Andrews, since 1991. They were school sweethearts who first met at St. George’s School during the first week of their 10th grade. Susan is the daughter of Rev George E. Andrews, who was the headmaster of St. George's School.

The couple married in 1991 at their high school chapel. Tucker prefers to keep his family life behind the spotlight. He is also very protective of his wife and kids. The couple has been married for nearly thirty years as of 2020.

Carlson and Andrews share four kids. They have three daughters named Dorothy, Lillie, and Hopie. Likewise, they have a son named Buckley. There is not much information about Carlson's kids.

In the early 2000s, a woman named Kimberly Carter falsely accused Tucker of raping her in a Kentucky pizzeria. The allegations could have easily ended Carlson's career. However, it was found out that Carter suffered from schizoaffective disorder, and she later said it was all misunderstanding.

The Fox News host spent $14,000 in legal bills defending himself and denying the allegations. He never sued Kimberly but wrote about her in his autobiography, Politicians, Partisans, and Parasites.

Tucker Carlson, as a political commentator, author, and T.V. personality, has amassed a net worth of $30 million as per celebritynetworth. He earned such a massive fortune through his work as a television pundit. Additionally, he is a published author and columnist.

As one of the highest-rated television personalities in the U.S., Tucker earns an annual salary of $6 million. He replaced Bill O'Reilly, who was making $20 million a year from Fox News. Tucker's fortune came from hosting the show, Tucker Carlson Tonight.

In June 2020, his show became the highest-rated cable news show in the U.S., with an average of 4 million viewers. Further, he attracts more viewers than Fox's rivals CNN and MSNBC combined. Apart from his television earnings, Carlson made a $10 million publishing deal for his book "Ship of Fools: How a Selfish Ruling Class Is Bringing America to the Brink of Revolution."

How Tucker's show makes over $100 million?

As per iSpot, TV, Tucker Carlson Tonight sold over $108 million worth commercials in 2020. The same source revealed that the show made more than $190 million in 2018 from advertisers.

Since 2009, Carlson has also been a political analyst for Fox News. He has worked as a co-host of Fox & Friends Weekend in 2013. It is said that the broadcaster is attracting more ad money than his colleagues Sean Hannity and Laura Ingraham.

Tucker and his brother Buckley have been involved in a case related to the estate of their late mother for nearly a decade. Their mother, Lisa Vaughn, was the beneficiary of an oil and gas company in Central California's rural areas. As per reports, the companies occupied a combined total of 70,000 acres of land.

At one point, the brothers thought the royalty rights were worth a relatively insignificant amount of money, maybe $125,000 at most. They eventually learned the rights were worth a minimum of $2.5 million. They sued their late mother's estate, which expressly left each brother the nominal amount of $1. That lawsuit is reportedly still unsettled as of now.

In 2011, Tucker and his wife sold their D.C. "s Kent neighborhood house for $4 million. The six-bedroom, eight bathrooms house had a heated pool and six fireplaces. Less than a mile, the couple purchased a seven-bedroom, six-bathroom house for $2 million. They sold that house for $2.04 million in September 2017.

Likewise, in July 2017, they bought a new house again in the same neighborhood for $3.895 million. The 7,400 square feet house includes five bedrooms and six-and-a-half bathrooms. In July 2020, Tucker sold the house for $3.95 million, a slight increase.

In early 2020, Tucker purchased a $2.9 million home on Gasparilla Island in Florida. The roughly 3,000-square-foot single-level main house spills out to a lushly planted courtyard dining terrace, has three bedrooms and 3.5 bathrooms, while a poolside guesthouse adds another bedroom and bathroom.

During the protest in Kenosha, Wisconsin, for Black Lives Matter in August 2020, a 17-year-old teenager killed two unarmed black protestors with an AR-15-style rifle. The teen named Kyle Rittenhouse has been charged with two counts of first-degree homicide and one count of attempted homicide.

During his recent show, Carlson defended the accused teen on his show, saying: "Are we really surprised that looting and arson accelerated to murder? How shocked are we that 17-year-olds with rifles decided they had to maintain order when no one else would?"

Carlson received immediate backlash on social media, with many people tweeting Fire Tucker Carlson Now on Twitter. A Fox News representative said that the network's executive didn't comment on Carlson's remarks. However, the network did cite the full text of the segment to demonstrate that the host meant to criticize law enforcement and not justify the actions of a vigilante.