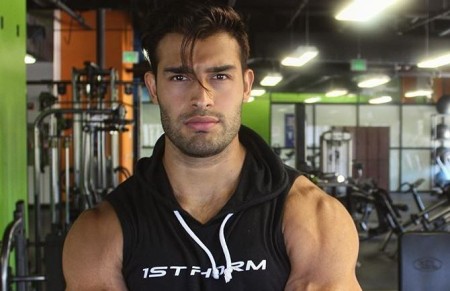 What's it like to date the Princess of Pop? Well, for Sam Asghari, a handsome model/actor is enjoying every day romancing his 38-year-old, pop icon girlfriend, Britney Spears. Asghari, a 26-year-old personal trainer, is known as Britney's supportive partner. Are they going to marry soon? To know more stay with us.

Sam Asghari, who belongs to Persian heritage, was born on March 3, 1994, in Tehran, Iran. His family moved to the U.S when he was a teenager. Sam's sister, Fay Asghari, is also a model who first made her ramp walk debut at Los Angeles Fashion Week in March 2019. Besides, he has two other sisters.

Asghari first met his lady in October 2016 during the music video shoot of Spear's song, Slumber Party. Both in reel and real life, Sam appeared as Britney's love interest. For Spears, it was love at first sight, while, Asghari was excited to meet one of the biggest artists of all time.

Britney made her new relationship public on Instagram after she shared a picture on New Year's day with Asghari in January 2017. The couple has been together for four years. As per sources, Sam has been a strong pillar in Britney's personal and professional life. The Toxic singer always praises her lover for inspiring her to be a better person.

Well, the couple is in no rush to tie their wedding knot. Meanwhile, their families have become closer over the past few years. In July 2019, the couple sparked engagement rumours during their red carpet debut at the Once Upon a Time in Hollywood premiere. Spears was seen wearing a diamond ring on her left hand.

When asked about the possibility of a wedding, Asghari told Entertainment Tonight: "Absolutely, this is something that every couple should do, That's the whole point of a relationship-we are a family." Further, Britney has also expressed her desire to have a child and start a family.

The Iranian personal trainer turned actor, Sam Asghari earns a decent amount of money from his professional career. However, there is no exact information about his net worth. He is an elite athlete of a fitness brand called First Phorm.

Further, Sam is a model and has appeared on cover magazines of Muscles and Fitness. On average, his annual salary might be over $47,654. Fitness trainers like Steven Tinoco and Brett Hoebel also has an impressive fortune.

The primary source of Sam's wealth is fitness, but currently, he is working for Bet TV's television show, The Family Business. Therefore, his earnings will increase even more from his acting, modelling, and fitness career. On the other hand, his girlfriend, Britney Spears, has a net worth of $115 million. She is one of the best-selling artists of all time.

Britney's Past Marriages and Kids

Before dating the young fitness trainer, the Baby One More Time singer was married twice. She first married her childhood friend, Jason Alexander, in January 2004 but shockingly the marriage lasted for only 55 hours.

Britney then began dating dancer, Kevin Federline in July 2004. Due to the delay in their prenuptial agreement, the couple were not legally married until October 6, 2004, although they had a wedding ceremony on September 18.

Britney suffered a publicized breakdown in 2007 and 2008 which led to a court-approved conservatorship. Since then her father, Jamie Spears, has been handling her major personal or financial decisions.

At present, Britney has no control over her estate, and over the years, fans are calling to end the conservatorship with a movement called #FreeBritney. Recently, she won a minor victory in her conservatorship battle and will be allowed to expand her legal team.

Throughout her legal troubles and anxiety, Asghari has been a huge support to Spears. The couple might soon be husband and wife if the singer's legal troubles would end.