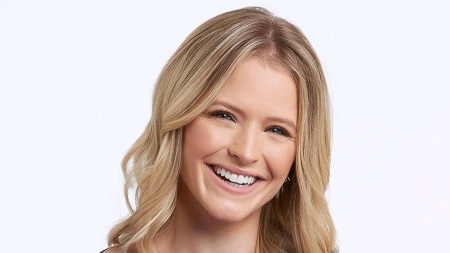 Sara Haines is a Daytime Emmy Award-Winning American Journalist and TV host who is famous for working on ABC New, Good Morning America, and Today as a news correspondent. Aso, she appears on a daytime talk show named Strahan, Sara, and Keke on ABC at 1 p.m. ET and 12pm C/P. Prior to that, she was serving for The View as a co-host in 20th and 21st seasons.

Sara Hilary Haines was born on September 18, 1977, in Newton, Iowa, the United States to the parents, Dick and Sandy Haines. Further, she has three siblings. She holds American citizenship and belongs to the white ethnicity. So far, she received her Bachelor of Arts degree in government from Smith College in Northampton, Massachusetts in 2000.

Who Is Sara Haines' Husband?

He is none other than, Max Shifrin (born on January 18, 1983), who is best known as the supportive life partner of Sara. By profession, he is an attorney who works at the New York firm Baker Hostetler. He is five years younger than her.

The duo first met through the online dating site OkCupid. Afterward, they had decided to meet for drinks that night. But their drinking plans on their first date turned into dinner because of Sara's brother and his best friend's appearance at the same bar.

After their first date, they became a couple, and finally, Max, 37, purposed her after nine-month of dating. Thankfully, Haines, aged 42, said yes, and they walked down the aisle on November 22, 2014, in the Bahamas. Since the day, the happy couple is enjoying their conjual life with no sign of divorce for over half-decade.

Yes, these beautiful married duos Haines and Shifrin are happy parents of three younger kids. They became parents for the first time when they welcomed their eldest son or firstborn child Alec Richard Shifrin on March 5, 2016.

At the time of his birth, Alec, now four years, weighed 7 lbs and was 5 ounces long. After a year, the couple again gave birth to their second child or daughter Sandra Grace on December 23, 2017. Sandra, aged 2, was named after Sara's mother. She weighed 7 pounds and was 2 ounces long during her birth time.

Their third baby boy, Caleb Joseph was welcomed on 26 June 2019. He was named after her brother and grandfather. Now, the family of five resides at their home which is located in Williamsburg, Brooklyn.

As of early 2020, Sara Haines has accumulated an impressive net worth of $6 million. She credits most of her worth to her successful journalism career. Well, she is active in the broadcasting field for about 18 years.

Haines has been working as a correspondent of ABC News since 2013. Currently, she serves as a cohost of Good Morning America and GMA3: Strahan, Sara, and Keke, alongside Michael Strahan and Keke Palmer. Thus, her annual salary is valued to be more $1 Million. Similarly, Michael earns $17 million in a year hosting the morning show, GMA.

Previously, she worked for an American talk show, The View on ABC as a permanent co-host. Now, the show is hosted by Whoopi Goldberg, Joy Behar, Sunny Hostin, and Meghan McCain.