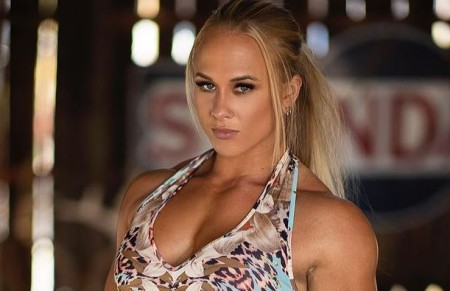 Sarah Backman enjoyed her career as a professional wrestler and arm wrestler. A former eight-time World Arm Wrestling Champion, Backman is one of the world's most popular women's arm wrestlers. She even worked on WWE working in their developmental territory NXT from 2013-2014. Backman now works as a real estate broker. She appeared as Spirit on the Swedish version of MGM television's Gladiators franchise.

Sarah was born on December 8, 1991, in Stockholm, Sweden. At age 14, she began arm wrestling but left the career in 2013 after signing with WWE. There is not much information about her parents and her educational background. However, to know exciting details stay with us.

Sarah was a Married Woman!

Yes, Sarah Backman was married to fellow wrestler, Taylor Rotunda who is known by his stage name Bo Dallas. Sarah met her future husband at the start of her wrestling career around 2013. She recalled it was love at first sight. The couple married on June 26, 2014, in a backyard wedding in Florida.

Sarah and Taylor didn't share any children. They weren't involved in any controversy or scandal as well. However, the couple's marriage took a hit when the news of their divorce came in late 2019. Neither Backman nor Rotunda has spoken about their split. It seems they quietly dismissed their marital union in a low-profile manner.

At present, Backman and Rotunda both are single. It is not known whether the past spouses are on healthy terms, but fans are sad to see them apart.

Taylor Michael Rotunda, an American professional wrestler signed to WWE is better known by his stage name Bo Dallas. The 30-year-old, Dallas is a third generation pro wrestler whose grandfather is the WWE Hall of Fame member, Blackjack Mulligan.

Rotunda's brother, Windham Rotunda is also a wrestler who performs under the ring name, Bray Wyatt. Talking about Bo, he is the winner of the WWE Raw Tag Team Championship and WWE 24/7 Championship. He first met his future wife, Sarah in late 2013 while they both started their WWE career.

The former World Arm Wrestling champion, Sarah Backman has an estimated net worth of $800,000 as of 2020. Now that she works as a real estate agent, Backman's wealth must have increased. The average salary for a real estate agent in the United States ranges somewhere between $212,879-$327,879 a year. However, the amount can vary as different agents charge different commissions. WWE superstars like Brandi Rhodes and real estate like Amie Yancey has a stunning net worth.

While Backman was a professional arm wrestler she received a generous sum of money from her sponsorships. She even went on to appear on the Swedish version American Gladiators franchise. After retiring from arm wrestling, Sarah signed with WWE in May 2013. Her ring name was Shara and on April 30, 2014, she was released from her contract.

Backman once revealed in an interview that while training she had to work odd jobs. She used to work at supermarkets, fitness stores, restaurants. Now, she is enjoying a lavish lifestyle.