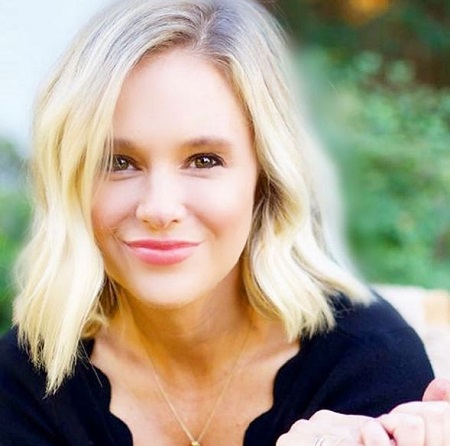 Sarah Brice is a TV personality who came to prominence after winning the ABC's dating and relationship reality television series, The Bachelor season 7 alongside Charlie O'Connell. After the show, she made an appearance on The Real Housewives of Orange County and Jason & Molly's Wedding. Now, she is working as the National Director of Practice Marketing Support at Cutera University.

She was born on 15 June 1980, Lafayette, Louisiana, the United States to the American parents. As per her citizenship, she is American and is of mixed ( French-British-Scottish) ethnicity. Further, she received her bachelor's degree from the University of Oklahoma.

Who is The Bachelor Season's Seven Winner, Sarah Brice Married?

Well, most of her fans following are excited to know who is she actually married to. Forty Years old Sarah got hitched to her long term husband whose actual name is not known to the media.

Although she oftently shares images of her partner on her social sites, she has never mentioned her hubby's detailed information until now. According to sources, her married is Sarah Brice Calver by the way. That means, her life partner's last name is Calver.

Similarly, the couple tied the knot on 13th May 2012 in a very private ceremony. They might be dated for a few years before matrimony but their love history also remains away from the media.

In early 2020, Sarah and her husband Calver have celebrated their eight years of the wedding anniversary. Moreover, she mostly shares wonderful moments with her family on her IG wall.

Does Sara Shares Children With Her Mysterious Husband?

Well, the answer is yes. Brice, the registered nurse, is a beautiful mother of three little kids, all of them are boys. She and her spouse became parents when they first welcomed their eldest baby son Jack Calver on 6th June 2012.

Secondly, they welcomed another bundle of joy Lewie Calver. Then after Sara announced her third pregnancy on 3rd Feb 2015. Finally, the family of four became five when their youngest son Max Calver arrived on April 13, 2015. And having four boys on her family, Brice feels totally blessed and luckiest woman on the planet.

Yes, you have read that correctly. Sara has previously dated the contestant of The Bachelor, Charlie O'Connell, the younger brother of Jerry O'Connell. Actor Charlie selects her on his final rose ceremony but did not propose her at that time. Afterward, they began a relationship in 2005.

But sadly, things between them didn’t work out. So they dedicated not to continue their love romance and finally broke up for good in 2010. They were together for nearly five years.

As of 2020, Sarah Brice has an estimated net worth of around $90,000 thousand. She credits her wealth to her thriving career working as a reality TV star, and marketing expert. Also, she used to work as a delivery nurse in Los Angeles, California.

As we already mentioned, Brice came to fame when she became the winner of The Bachelor Season 7, premiered on March 28, 2005. As per some sources, she received the cash prize of $250,000. Similarly, Jade Roper and Demi Burnett are a contestant on The Bachelor's season 19 and season 23 respectively.

More to that, she and her friend, Jen Lothamer makes the lifestyle blog and parenting blog All-out Celebrations on her Youtube Channel. The ladies even made a $3,000 “Parentpreneur Grant” from The First Years.

Also, she is the National Director of Practice Marketing Support at Cutera University.