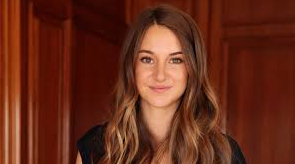 Shailene Diann Woodley aka Shailene Woodley is an American actress, film producer, and activist. At the age of four, Woodley started modeling and began to act professionally in small television roles. She first gained prominence in the ABC Family drama series The Secret Life of the American Teenager (2008–2013) for her starring role as Amy Juergens.

In her career she's featured on several music videos like "Our Dea, Stand Up, Where's the Love?". Woodley was born on November 15, 1991, in San Bernardino, California. Her mum, Lori Woodley is a school counselor, and her father, Lonnie Woodley, is a school principal.

The 28-years-old Shailene is in a relationship. She is currently having a romantic affair with Ben Volavola. Her boyfriend is an international rugby union player from Fiji who plays Racing 92 for the French Top 14 side.

Shailene partner featured for Super Rugby teams like the Waratahs, the Crusaders, and most famously the Rebels.

Their romantic relationship started back in 2017. As the actress uploaded a cute photo of her hand wrapped in somebody else's. Nonetheless, a few days later viewers got some clarification as to who the hand belonged. It was none other than the rugby player Ban Volavola.

Since then, the love birds have shared super romantic selfies to affirm their partnership.  Together, they also made their Red Carpet appearance in 2018 at Shailene's film premiere, Adrift.

How Did Their Love Start?

The beautiful couple first met when Shailene worked on her script, Adrift, which was shot partly in Fiji and New Zealand. The bond between them emerges from there. Basically, it was Shailene's works which made it possible to meet with her soul mate.

Furthermore, after her shooting, two of them were seen first time cuddling and hugging near New Zealand's Auckland cafe. As per now they really seem comfortable with one another.

Rumors spread around Woodley potentially dating her co-star of Secret Life Daren Kagasoff. Their protagonists had already hooked up on-screen before the show was even started.

She also used to date an American actor Eriza Miller to whom she had worked together for a certain time. They dated each other in 2012. However, there are no details on how the young couple got separated.

During 2015 people speculated that Shailene dating Nahko Bear who is a front-man of music group Nahko and Medicine for the People. During that time,

Meanwhile, she made a sensation when she was rumored to date Theo James. They both are have worked in a movie called “Divergent”.

Activist Besides Her Acting Career

Woodley did not consider herself a feminist. She believes in sisterhood more than feminism. Shailene is a dedicated environmental activist and champion for climate change. In 2010 she and her mother co-founded the All It Takes a Non-Profit Organization.

All it Takes is a community leadership initiative targeted at inspiring young people. They inspire youngsters to exercise empathy, kindness, accountability, and intent. The mission of these values is to promote lasting, positive change for themselves, others and the world.

In mid-2016, Woodley joined Our Revolution team, a political organization that seeks to inform citizens on problems, involve people in the political process and seek to mobilize and promote progressive leaders.

Sentenced To A Year Of Probation

Later on, she was charged in the allegation of criminal trespassing in Saint Anthony, North Dakota on 10 October just like Chris Quinten. Evidently, Woodley pleaded guilty and was sentenced to probation for one year.

Being the actress of several box office hits, she has accumulated the net worth of $1 million as per 2020. Similarly, actress Dina Korzun also owns a fortune of a million dollars.

She has portrayed a role in almost 16 Hollywood movies like Endings Beginnings, Adrift, Snowden, The Fault in Our Stars, Divergent, and The Descendants where she must have earned thousands of dollars.

Besides her film career, she also acted on several TV like Replacing Dad, Big Little Lies, The Secret Life of the American Teenager, and many more.

From her roles in TV series, she might charge around $50,000 to $60,000 per episode which is an average wage rate TV series actress.