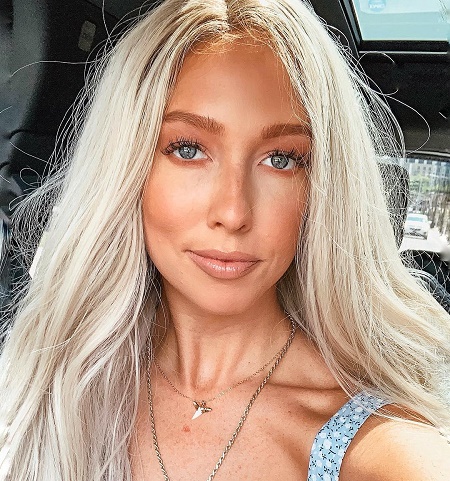 Shannon Ford is an American reality television personality who rose to fame after appearing on the Kristin Cavallari's reality television series, Very Cavallari. She also served as the head of social media for Kristin's company named Uncommon James. Prior to that, she was a model who hit the top 16 in the 2012 Miss South Carolina Teen USA.

She was born on November 22, 1993,in Gilbert, South Carolina, the USA to the parents, Vic Ford, and Sharonkay Ford. Further, she has one sister named Emery Ford who is head designer of GTS Innovation Team at IBM. She holds American citizenship and belongs to the white ethnicity.

Yes, the former reality TV star already has found her new beau. He is none other than, John Gurney, who is a musical singer and artist. Added to that, he won the title of the 2018 NSAI song Contest which was presented by CMT.

This new couple has been together since December 2017 and is still going healthy. Now, scrolling the Instagram accounts of the pair, the two are frequently seen spending most of their time together, mostly in intimate dates. It seems these lovers are so much in love with each other.

Recently on Jan 23, the graduate of the University of South Carolina wished on her sweetheart's birthday, Gurney, by posting the image of holding him. "Dating you makes other people like me more, I’m just sure of it!, she captioned: Also, you are really hot. I love you".

In addition to dating John, she has dated a Chicago Bears lineman Kyle Long in 2017. Also, Shannon, 26, has dated her former partner, Michael Anthony Gelotte.  A

Why Shannon Was Fired from Very Cavallari?

Well, Very Cavallari is a reality TV show that broadcasts on channel E!. The series is about Kristen Cavallari's Uncommon James Headquarters company. Since she has motley crew members to help her start her company and Shannon Ford was one of them.

And there has been a heated argument between her and her co-worker Brittainy Taylor about how to rearrange their office space in the group. But from the start, Shannon and Cavallari were having problems.

On the premiere of season 2, Kristin is fed up with Shannon seemingly skipping meetings, breaking deadlines, and not turning up at the office. In reality, in the past, she had given her chances of saving herself, but she has not yet shown a commitment to her work.

Ford also excused her, claiming "it was a human error," which had made her other errors. But Kristin wasn't having it, so she just fired Shannon forward Cavallari said in the premiere, after firing Shannon:

“It was something that needed to be done a long time ago.”

Though Ford also posted a shadow on social media saying: "I guess it was too little, too late". Besides this, the other cast members of the show such as Jay Cutler, John Gurney, Kelley Henderson, Reagan Agee, Taylor Monaco, and Writh Campbell.

What is Shannon Ford's Net Worth?

As of now, as a reality TV star, Shannon Ford has an approximate net worth of $400,000 for her entire career. She also makes a fair amount of her modeling projects like The Block Agency as well.

Ford has walked for runway fashion shows like Supermodel Unlimited Magazine in LA, New York City, Charlotte and Cinderella's Closest, etc. Likewise, she uses the Instagram account to advertise her own merchandise and as well as sponsored content.

In addition, she has a YouTube channel in which she posts some makeup tricks, such as Winged Eyeliners. She has 10.5k subscribers as from 2020.