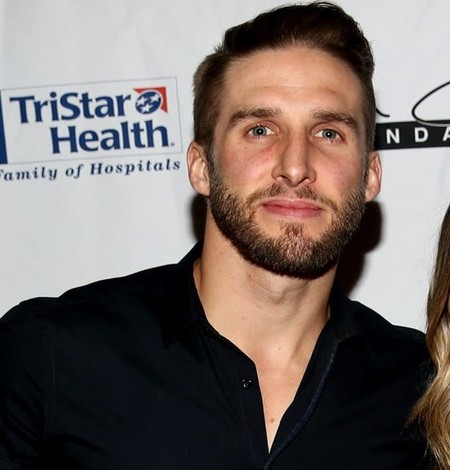 Shawn Booth is an American reality TV personality and personal trainer. Moreover, Shawn came into limelight when he appeared in the 11th seasons of the elite show, The Bachelorette. Apart, he won the show in 2015 and became the fiancee of Canadian beauty Kaitlyn Bristowe. However, Booth & Bristowe called-off their engagement after three years in 2018.

Reality TV star, Shawn Booth was born on May 18, 1987, in Windsor Locks, Connecticut, USA. Yet, he hasn't shared information about his parents. However, he grew up and raised with his two siblings sister; Jessica Paulo, and Meghann Booth in Nashville, Tennessee, USA. He holds an American nationality and belongs to white ethnicity.  Moreover, he completed his graduation from Kenne State College in 2008.

Well, Shawn, 33, was once in a romantic relationship with his partner. Shawn took participate in the 11th season of The Bachelorette featuring Kaitlyn Bristowe. Moreover, Kaitlyn is a Canadian television personality and host. Eventually, Shawn won the show when The Bachelorette, Kaitlyn chose him on the season finale.

Finally, Shawn proposed her on May 4, 2015, with a ring of commitment that she approved. Afterward, the love birds were living happily together. They shared a beautiful memories and moments with each other before deciding to break up.

After being in a relationship for more than two years, the couple called off their engagement in September. However, they officially announced their separation on November 2, 2018, with a joint statement. As of now, Shawn and Kaitlyn are still good friends and respect each other decisions.

The handsome hunk guy, Shawn is currently leading a single life after the heartfelt separation with his ex-fiancee. Besides, he is enjoying a happy life with her family and friends. He loves to live fit and always focusing on his career in fitness training.

After the break-up with his ex-fiancee, Shawn was rumored of dating WWE announcer, Charly Arnolt. However, Booth neither accepted nor confirmed his relationship with Charly. Besides this, we don't have much information on his past relationship and dating history right now. As of now, he is living a single life with his family and friends.

The six feet and two inches (1.88 m) tall, Shawn has earned a decent amount of money from his career as a personal trainer and reality TV star. Moreover, he has an estimated net worth of $1 million which similar to Kathryn Newton and Carson Lueders.

On the other hand, the average salary of a personal trainer in the USA ranges from $56,875 per year. Apart, he is also popular on Instagram @shawn_booth18 with 807K followers. So, he earns around $2,000 per post. As of now, he is enjoying a healthy and wealthy life with his family in the USA.

Check Out Married Celeb For More Interesting Fact and Biography on Celebrities' Life!!!