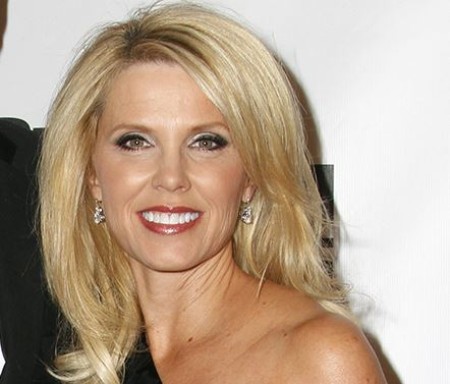 Shonda Michelle Brewer was born on November 23, 1967, in Dundalk, Maryland, United States. So far, she is an American citizen and belongs to the white ethnicity. She is a graduate of Towson University.

Got Married in the Early 1990s

This gorgeous woman, Shonda, is now enjoying her marital bond with her renowned longterm partner, Curt Schilling, for about 27 years. They exchanged the wedding on November 7, 1992. Their functions were held on behalf of their family, relatives, and close friends.

Since the big day, Shonda and a member of the 3,000 strikeout club, Curt, lead a healthy and strong married bond. So far, there is no news about their extramarital affairs on social media yet. Similarly, a baseball player, Mark DeRosa, also enjoys a happy life with his partner, Heidi DeRosa.

The couple who married in 1992 shares three sons and one daughter. They gave birth to oldest or firstborn son Gehring Schilling after three years of marriage on May 27, 1995, and their second child Grant Schilling, born on October 13, 1999.

Shonda and Curt's third-born child, Gabriella Schilling, was born on May 22, 1997, while the youngest one daughter Garrison Michael, born on June 27, 2002. Nonetheless, when Curt is often out with the teams, Shonda frequently stays home with the babies.

The whole Family Had Disorder Problems

Shonda Michelle Brewer's all of the children have been diagnosed with deficit hyperactivity disorder (ADHD).  Her eldest son Gehring also battles an eating disorder. And the behavior of her son Grant was diagnosed with Aspberger Syndrome.

And, in her novel, Best Kind of Different, Shona tells the story of their son's Asperger's Syndrome, how it changed their lives.

The Total Amount of Fortune

The overall wealth of the former Boston Red Sox's wife Shona certainly falls within the $500,000 range. As an author, she published a book named The Best Kind of Different on 23 March 2010. And the amazon lists her book for $23.67.

Loses His Assets After Retirement

Schilling retired from baseball and formed a video game business called 38 studios (named after his jersey number). He spent all his baseball fortune of $50 million trying to save the business.

Unfortunately, the company lost everything due to some poor funding issues. Besides, Schilling is being sued by the state of Rhode Island for a $75 million loan to his failed video game company 38 Studios.

Massachusetts's Home is on Sale

Shonda and her husband, Curt, bought the 26-acre property in 2004 for $4.5 million from the former Patriots quarterback Drew Bledsoe. Now, they put the home on the market for an asking price of $2.5 million.

The 7,981 square feet, consists of 7 bedrooms, 6 full and 2 half bathrooms. It also has four fireplaces with a master suite with a private terrace.