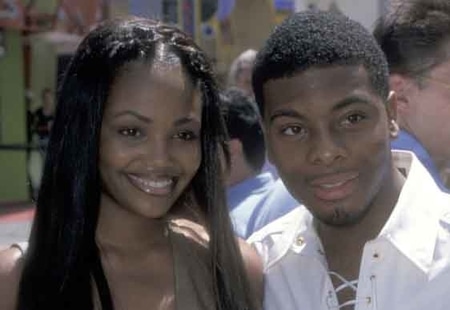 In the decade of the 90s, Tyisha Hampton and her now former husband, Kel Mitchell, found all the success in the entertainment industry. Kel became an overnight star with his hit Nickelodeon TV series All That. Similarly, Hampton amazed her fans with works in Ganked and City Guys.

The pair, however, could not sustain their marital life for an extended period. After six years of their relationship, the duo called it quits. In an interview with People magazine, Mitchell talks about how he dealt with depression after the split. On the other hand, Hampton kept herself away from the media. In this article, let's find out more about Tyisha's love life after the divorce.

Who is Tyisha Dating Now?

The forty-one years old steeped away from the showbiz industry, as we discussed. Hampton's last film came in 2008 by the name of Voyeur: In Hindsight. During that time, she was already a divorcee and raising two children.

In those years, the paparazzi never spotted her getting cozy with any guys. She remained single at the time, but as of now, there are no precise records of her relationship status. Hampton is also not an avid user of social media, which makes it more difficult to track her personal life.

So, as long as the actress comes out herself and announce her relationship status, we can imagine her to be single. According to some online tabloids, we know that the actress is living with her two children and enjoying her single life.

Tyisha found love in the hit 90s star Kel Mitchell. Neither Kel nor Hampton talked about how they first met each other, but their wedding certainly got more attention. Mitchell was a massive star back then, especially with his role in the Nickelodeon shows.

The lovebirds walked down the aisle on October 16, 1999, in a private ceremony. Despite many fans wanting to witness the big day in the comedian life, the pair got married in an intimate ceremony. Their matrimony looked all good as the duo was always smiling, but people hardly knew about the ups and downs they went through in their marital life.

After some irreconcilable difference between the two, the lovebirds decided to end their marriage in 2005. Kel faced some severe crises in his life during that time. In an interview with People magazine, he talked about how he got suicidal thoughts, and work was very scarce.

On the other hand, Hampton went on to do a couple of films and eventually take a break from Hollywood.

With her marriage with Kel, Hampton gave birth to two children. She became a mother to her son Lyric Mitchell in 1999 and a daughter Allure Mitchell in 2001.

Not many but a couple of online tabloids suggest that she had another child too. Upon doing some research, we found out that she is also the mother of Benjamin Flores Jr A.K.A. Lil P'Nut. Tyisha became pregnant with Benjamin on July 24, 2002.

The birth of Benjamin came during her marriage with Kel because she parted her ways with Mitchell in 2005. Benjamin's father is Benjamin Flores Sr, which suggests that Hampton might be having an extra-marital affair with Benjamin Sr.

As of now, Benjamin Jr is finding his success on TV shows alongside his TV dad, Kel. Mitchell is currently married to Asia Lee and has a daughter, Wisdom Mitchell. Besides that, he also featured in Dancing with the Stars, where stars like Milo Manheim and Frankie Muniz.