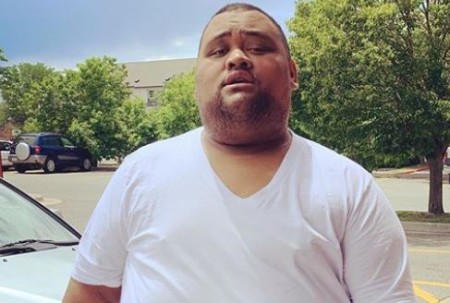 Sione Kelepi isn't your ordinary star. For a guy with insanely huge body weight, Sione became popular after posting funny dance videos on Vine. Through his dance moves, Kelepi earned thousands of followers social media platforms. Moreover, he also appeared as the dancing guy on Meghan Trainor's music video, "All About that Bass."

Have you watched the 2016 action comedy film, Central Intelligence? If yes, then you might remember one particular scene where Dwayne Johnson's character sings in the shower. For that scene, Sione acted as Johnson's young and fat version. Now, let's know some lesser-known facts about Kelepi in detail.

The 28-year-old, Sione Kelepi hasn't shared much when it comes to his personal life. It seems he is single and isn't dating anyone at the moment. Further, Sione is also unmarried and doesn't have kids.

Sione, who goes by the name "FattieMcBaddie" on his YouTube channel can be often seen posting pictures with his family and friends. Not once he has mentioned about his girlfriend or partner. Hence, we can say that Sione doesn't have a girlfriend as of now.

There is no exact information about Kelepi's net worth and income. He might have earned a decent sum of money from his social media profiles but hasn't shared anything about his earnings.

Talking about his social media accounts, Kelepi has 23.6k subscribers on YouTube, 167k follwoers on Instagram, 64.1k followers on Facebook, and 4.4k followers on Twitter, respectively. Further, Sione gets paid from sponsorships, campaigns, and brands promotion.

Kelepi's amazing moves landed him a role on the 2016 movie, Central Intelligence. He played the younger version of Dwayne Johnson's character Robbie Weirdicht. Besides, the film starred actors like Kevin Hart and Aaron Paul. Directed by Rawson Marshall Thurber, the movie went on to collect $217 million at the Box-Office.

Kelepi first gained wide popularity in 2014 after appearing in Meghan Trainor's hit song, All About that Bass. In the video, Kelepi can be seen showing off his cool dancing skills. As of October 18, 2020, the son has 2.4 Billion views on YouTube.

Further, one of Kelepi's video, "Introducing the #MaraschinoStep" went instantly viral. Do you know he previously worked as a train conductor at Disney World before getting famous?

Afterwards, Sione's fame rose from a vine star to YouTube and Instagram Star. As of now, he is popular among fans for his body positivity. Models like Denise Bidot and Ashley Graham also advocates against body shaming.

Sione Vaka Kelepi was born on July 22, 1992, in Alameda County, California, the United States. He belongs to Tongan descent. His family frequently appears on his social media. For one of his first video, Sione featured his father in a vine called "My Dad is awesome."