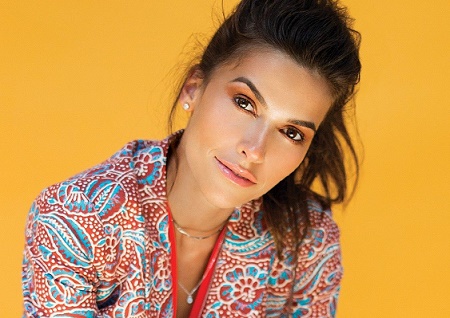 Sofia Pernas is a Moroccan-Spanish actress who has been starring in American CBS action-adventure TV series drama, Blood & Treasure since 2019. In addition, she is known for her roles as Hannah Rivera in the NBC series The Brave, from 2017 to 2018, and as Marisa Sierras on The Young and the Restless in 2015.

She was born on July 31, 1989, in Fes, Morocco. But later she moved to the United States at the age of 5 with her family and grew up in Orange County. Her father is from Spain while her mother is Morocco so both are multilingual. She holds Moroccan-Spanish citizenship and belongs to the mixed ethnicity.

Yes, the 1.68 m tall actress has found a new partner in her life. He is none other than American actor, Justin Hartley, who is 43 years old. This new pair even shared the screen in TV series, The Young and the Restless from June 2015 to May 2016.

30, Sofia and Justin have been dating for several weeks according to some online tabloids. The sources also added that the two are spending a lot of time at Hartley's house. Likewise, Pernas and her new lover Justin were seen kissing outside a doctor's office in Los Angeles where TMZ captured the photographs.

However, the Moroccan-Spanish actress had four on-screen matchups in the past, including Peter Bergman, Robert Adamson, Christian Kane, and Miles Villanueva.

Sofia's Beau Justin is an Ex-Husband of Two Celebrities

Yes, you have heard the right. Before dating Sofia, Justin Hartley has been married twice in his entire life with 2 beautiful famous partners.

Back in 2003, Hartley started dating his Passions co-star Lindsay Korman (who played Theresa Lopez-Fitzgerald). She is an American actress best known for her role as Cara Castillo on All My Children, and Arianna Hernandez on the Days of Our Lives.

After six months, on 13 November 2003, the co-stars announced the engagement news and were married in a small ceremony on 1 May 2004. From their union, the partner gave birth to their daughter Isabella Justice Hartley on July 3, 2004.

However, they ended their marriage on May 6, 2012, due to irreconcilable differences after 8 years of togetherness. Even after the spilt, Justin and Korman, 42, still remain on good terms and share shared custody of their 15-year-old daughter.

In January 2014, The Young and the Restless star started dating an American actress, Chrishell Stause, 38. The exes engaged in July 2016 in July 2016 and were hitched on October 28, 2017. But Statuse who plays Jordan Ridgeway on Days of Our Lives filed the divorce from Hartley citing irreconcilable differences in November 2019.

Million Dollars Net Worth and Earnings of Sofia

As of early June 2020, Sofia Pernas is an American actress and model who has an estimated net worth of $1.5 million. She has earned this amount from her decades of acting and modeling gigs. Not to mention, Pernas also did reporting works in her earlier days, so that she could have paid off a decent amount.

Similarly, as an artist, her salary could fall in the range from $45,000 to $57,000 for her every character. And she earns an average $62,400, as a model. On the other hand, her new lover, Justin Hartley, now enjoys an impressive net worth of $7 million. All of his fortunes is basically comes from his multiple careers as an actor, writer, and director. His salary is reported to be $250,000 per season.