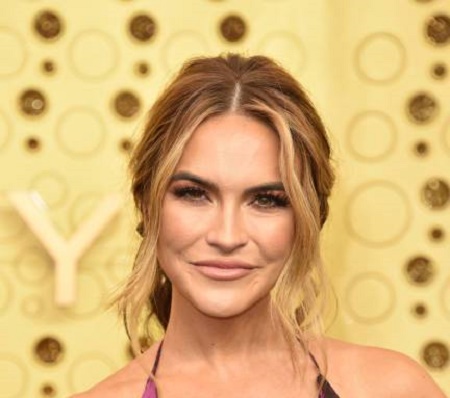 American actress, Chrishell Stause got people's attention after starring as Amanda Dillon on the soap opera All My Children (2005-2011). Further, she is also known for her roles like Jordan Ridgeway on the soap opera Days of Our Lives starting in 2013, and as Zoey Miller/Cynthia Castle on the TV series Youthful Daze (2015 - 2016).

Terrina Chrishell Stause was born on July 21, 1981, in Draffenville, Kentucky, U.S. She holds American citizenship and belongs to the White ethnicity. Further, she studied at Murray State University in Kentucky where she received Bachelors degree in Theatre, in 2003.

In January 2014, Chrishell, 38, and her boyfriend, Justin Hartley made their relationship public and became an engaged couples, in July 2016 after two years of affair. The soap opera actress and This Is Us' actor walked down the wedding aisle on October 28, 2017, at a rustic and romantic private ceremony.

The couple chose the Calamigos Ranch in Malibu, California for their big day to exchange vows with 75 of their closest friends and members of their families.

Why did Chrishell and Hartley Divorce?

In November 2019, Hartley filed for divorce after two years of marriage, citing irreconcilable differences. The Passions actor filed the paperwork in Los Angeles Superior Court and listed their separation as July 8.

But, the Young and the Restless alum listed their separation date as November 22 in her response to her own petition. She is looking for spousal help and is demanding her ex to pay her lawyer's fees. But, Justin's filing says he does not want to pay her spousal help and he wants her to cover the costs for her own lawyer.

A rep close to the actor revealed saying:

They had some issues, but definitely, Chrishell never felt that he would just go and immediately file for divorce, and not even attempt to save stuff.

Mistresses' star posted a cryptic quote on Instagram about dealing with the change of her ex-partner, which read: "It's hard to watch people change right in front of you, but it's even harder to remember who they used to be."

According to the multiple sources, the reason behind Chrishell and Hartley's separation might be money.  But, both parties remain silent about this matter.

Million Dollars Net Worth and Earnings

1.67 m tall, Chrishell Stause is an American actress who has an impressive $3 Million in net worth as of May 2020. She has amassed this amount throughout her acting career, appearing in many TV shows and films. Similarly, as an actress, her salary might fall in the range from $45,000 to $57,000 for her every role.

On the other hand, her ex-spouse, Justin Hartley, now has a total net worth of $7 million. His profit comes from his multiple careers as an actor, writer, and director. His salary is reported to be $250,000 per season.

In April 2019, Chrishell and Justin purchased a newly built home in Encino, California, for $4.65 million. The home covers 6,700 square foot area built in the style of a modern farmhouse.