Stephanie Hayden United With Kris Ford in 2011. Their Marriage Journey. 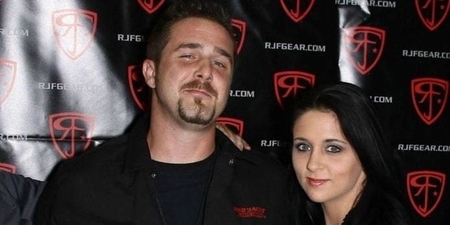 Since the reality TV show Sons of Guns ended in 2014, Stephanie Hayden and Kris Ford has stayed away from all the media attention. The show was quite a success, and the couple featured in the show alongside Stephanie's father, Will Hayden.

Stephanie and Ford walked down the aisle while they were filming the reality show. The couple not just share a fantastic love between them, they were also part of a scandal in 2014. To know more about the duos married life and their controversies read along.

Both Kris and Stephanie works at the Red Jacket Firearms LLC, which is a gun manufacturing and modifying company. Kris worked in the operations while Stephanie worked as the office manager.

That was the first time when the pair locked eyes with each other. Till this date, neither Stephanie nor Kris has said anything regarding their love affair. Probably after some time of dating, the duo exchanged wedding vows in 2011 in an intimate ceremony.

The wedding occurred when the gun show was still running on the television set. Despite being a reality star back then, the pair became successful in hiding their marital information from the public.

Hayden, from her marriage with Kris, welcomed two children. The couple is so secretive that they have not mentioned anything regarding their kids. In addition to this, Kris is also the step-father to Stephanie's son from a previous marital relationship.

Before tying the knot with Ford, Hayden walked down the aisle with William Scott. The married life with Scott, however, did not last very long. Stephanie ended her matrimony with Scott and moved on with her life. From her marriage with William, the couple share one son whose name is also kept hidden.

Stephanie is quite similar to other reality TV stars like Snowbird Brown, Bianca Beets in hiding her personal information.

According to the news posted by TMZ, the married couple was arrested by the police for assault on a child. On October 24, 2014, Kris allegedly hit Stephanie's nine-year-old son in Louisiana. Hayden was present there, but she did not stop Kris from hitting her son.

According to the TMZ, Ford bruised the nine-year-old with a belt. The boy showed the bruises he incurred on his thighs during the beating. Stephanie, however, is not charged with striking the child; instead, she got arrested for being in the same room during the incident and not stopping Ford.

Other Controversies in the Hayden Family

Kris and Stephanie are staying away from the spotlight after the show ended in 2014. After dealing with assault charges, the couple is now living under the rocks with their family.

Even though Stephanie and Kris are not subjected to any other controversies or rumors, the Hayden family is dealing with some scandals. In 2011, Stephanie's father, Will Hayden, became involved in a big scandal.

As per reports, Will faced the charges of child molestation. The case ran for some time, and on April 7, 2017, Will faced a double life sentence plus forty years in prison for the rape of two girls who were just eleven-years-old and thirteen-years-old.