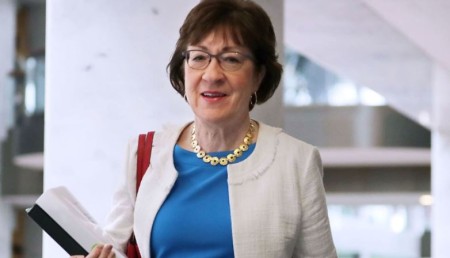 Susan Collins is an American politician serving as the Senior United States Senator fro Maine since 1997.  in 1994, she became the founding director of the Center for Family Business at Husson University. Collins is described as one of the Senate's more moderate Republicans.

Family Background having a Political History

One of six children, Collins, was born to parents, Patricia McGuigan Collins (mother) and Donald F. Collins (father). Both of her parents have served as the mayor of Caribou. Her father, a World War II veteran, served in the Maine Legislature as well.

Talking about her mother, she was born in Colombia, to American parents. Susan has English and Irish ancestry. The Collins family operates a lumber business established by Susan's great-great-great-grandfather.

Collins is married to her longtime husband, Thomas Daffron, since 2012. The couple was old-time friends who first met while Collins began working in the office of U.S representative, William Cohen in the later 70s. They have been married for only eight years as of 2020.

Collins and Daffron exchanged their wedding vows on August 11, 2012. Their wedding ceremony took place at Gray Memorial United Methodist Church in Caribou. The bride wore an off-white, sleeveless, full-length gown festooned with antique lace, while the groom wore a navy blue suit. The pair don't have any children.

Talking about Collins' husband, Daffron worked as the chief operating officer of Jefferson Consulting Group, a Washington, D.C.-based consulting firm. In the past, he held several senior management positions in government and the private sector.

The senior United States senator for Maine, Susan Collins, has an estimated net worth of over $2 million. She had an estimated net worth of $4 million in 2018. Collins has Investments over $400,000 on pharmaceuticals and electronics companies. As per the mandatory financial disclosure forms with a U.S. Senate committee Collins and her husband, Thomas disclosed a net worth between $2.3 million-$6.9 million.

As per sources, the vast majority of the couple’s holdings are in Daffron’s name. These consist of a variety of assets, including around 25 different municipal and corporate bonds. Daffron has engaged in trading stock, and he stated that it had no relation to Collins’ role as a senator. Do you know Kelly Loeffler is currently one of the wealthiest senators?

In the U.S Senate

Collins has been serving as the senior United States Senator for Maine for the past 23 years. She has worked for improvements in the field of abortion, economy, environment, immigration, etc. Susan and Jeanne Shaheen, the co-chairs of Senate Diabetes Caucus, helped signed a law to help increase competition in the insulin market.

Collins, a Republican, and House Speaker Sara Gideon are in a tight battle for Maine’s U.S. Senate seat. In 2020, the Human Rights Campaign (HRC) endorsed Collins' opponent since her 1996 election citing her votes for Brett Kavanaugh.