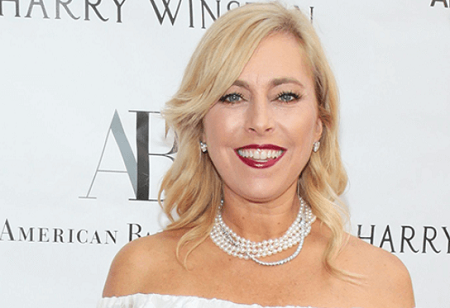 Sutton Stracke is an American reality television personality, entrepreneur, and fashion designer who is mostly known for being the party planner and hostess. Added to that, she gained global fame as a member of Bravo's TV show, The Real Housewives of Beverly Hills.

Sutton Thurman Stracke was born on September 21, 1970, in Augusta, Georgia, United States. She holds American Nationality and belongs to White ethnicity. But she moved to  New York in her early 20's in 1990 to pursue her dancing career.

It's a matter of fact that, the 48 years old Sutton was previously married to her childhood friend, Thibeault "Christian" Stracke. He's a real estate and corporate investor who's been active in the business for more than two decades. In addition, he is the global credit research head at PIMCO, an investment banking firm.

The exes first met when they were studying in their home town at the same Fine Arts High School. Then their long-term affair had become a marital partnership and ended up marrying on May 13, 2000, in a private function.

But things went sour between them, and the couple dedicated themselves to ending their marriage. Stracke and her ex-partner, Christian both filed for divorce in Los Angeles Court in September 2016 after 16 years of long marriage relationships.

Since the divorce, she remained single for a few years but now she's dating her new boyfriend, Michael Mahoney. He is a famous real estate agent.

Sutton and Christian have been separated for three years, but they had already welcomed their three children during their union. The duo gave birth to their oldest daughter Porter Stracke in around 2003.

The duo's two sons Philip Stracke and James Stracke were born in 2005 and 2008 respectively. She further has four dogs and two cats. Now, she lives a happy life together with her kids and new boyfriend in the gorgeous Bel Air mansion in Beverly Hills.

What is Sutton Stracke's Net Worth?

Sutton Stracke' has an estimated net worth of $2 Million as of early May 2020. She has accumulated most of her fortune through her career as a ballet executive director, entrepreneur and fashion designer. She is currently active on a number of boards in New York City, Los Angeles, and Augusta, including the prestigious American Ballet Theater.

As we all know, Stracke made her first TV debut with the appearance of season 10 of the popular reality show, Real Housewives of Beverly Hills. She serves in the show as a friend of Lisa Rinna's housewives, so she might get a fair amount for her appearances, just like Teddi Mellencamp, and Stassi Schroeder.

She is also a fashionista and boutique owner who created her own Boutique collection called SUTTON in 2019. Her collection of boutiques includes clothing, furniture, art, and decorative furnishings. Besides that, she owns a $7 million property in Augusta that consists of three-bedroom.