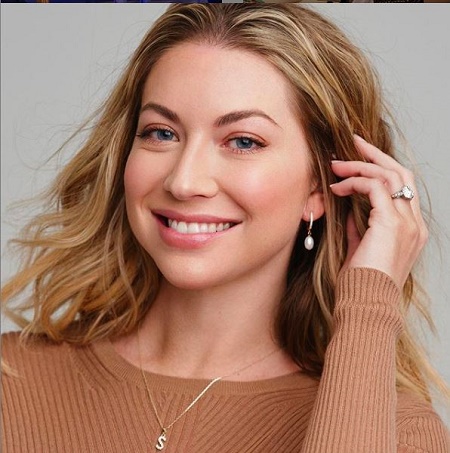 American TV personality, Stassi Schroeder is best known for being one of the new cast members of Bravo's reality TV show Vanderpump Rules.  She also hosts a weekly podcast named Straight Up with Stass and has featured in Beverly Hills' Real Housewives, The Amazing Race, Summer House, and Hollywood Medium.

Nastassia Bianca Schroeder was born on June 24, 1988, in New Orleans, Louisiana, to a father, Mark (architect) and mother, Dayna (jewelry designer). She has one younger sister, Georgianna, and two younger brothers, Hunter and Nikolai. She earned a Bachelor's degree in English writing from Loyola Marymount University.

Yes, Stassi, 31, is officially one step close to her big day. She first met her boyfriend turned fiance, Beau Clark, in August 2017 through her best friends Katie Maloney-Schwartz and Kristen Doute, who introduced them.

After a few talks and romantic talks, they started dating at the end of 2017. And on February 14, 2018, Schroeder made their relationship public by sharing the pictures of two on her Instagram story on the special day of Valentine's Day.

Surprisingly, Beau also made his official debut as "Stassi 's boyfriend" at the beginning of the seventh season in "Vanderpump Rules." They fought during her birthday episode but somehow they started to work as a happy partnership by the end of the season.

Finally, after nearly two years of love romance, the cute couple got engaged in July 2019 at the Hollywood Forever Cemetery in Los Angeles. They announced their big day news by posting the different photos on their respective Instagram.

Schroeder captioned their sweet photo: "OMG. I feel like Meghan Markle," while Beau posted pics of them kissing with the caption "Sloppy Kisses 4 Life! # FromDarkToClark."

When Stassi and Beau are Planning on getting Marry?

The Vanderpump Rules couple would be a married couple very soon. As they revealed they plan to tie the knot in Rome, Italy in October, amidst the COVID-19.

The TV personality, Schroeder said "Who the heck knows?" on  Watch What Happens Live With Andy Cohen's at-home edition on Tuesday. Then she said that this October, the two expect to tie the knot in Rome. Clark also added the health condition of his family members saying: " They're all healthy, but they're not allowed to leave, like, 200 meters from their homes now".

What is Stassi Schroeder worth?

Stassi Schroeder has an estimated net worth of $2 Million as of early 2020. Her income sources mainly come from appearances on numerous TV shows, works in modeling, and endorsements deals. Her salary is about $15,000 per VPR season according to some online tabloids.

In addition to reality TV, the 5 ft 7 inches tall runs successful podcasts such as Straight Up With Stassi. She is also the Next Level Basic's New York Times bestselling author, where Amazon listed the $12.57 price. Together with her co-stars Kristen and Katie Maloney-Schwartz, she also has a wine line company called "Basic Witch Potion No. 1 and 2.

Stassi and Beau bought a 3,000 square foot apartment in the Hollywood Hills in January 2020 for $1.7 million.