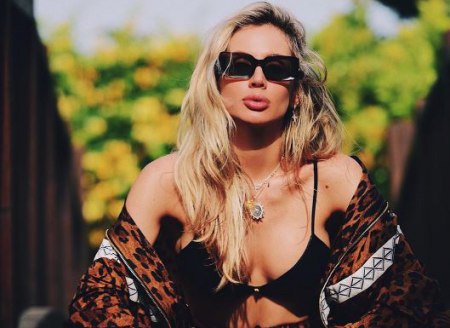 The following article will provide an insight to the 36-year-old, Svetlana Loboda, who is a famous Ukrainian singer and composer. Also known by the stage name LOBODA, she represented Ukraine in the Eurovision Song Contest 2009 and finished in 12th place with 76 points.

Who is Svetlana Loboda?

Svetlana is a famous singer, songwriter, and composer. She was born as Svitlana Serhiivna Loboda on October 18, 1982, in Kiev, Ukrainian SSR, Soviet Union.

She was born to father Sergey Vasilievich Loboda and mother Natalia Vasilievna Loboda. Additionally, she has a younger sister's named Ksenya.

From an early age, she showed an interest in acting and music. Her mother enrolled her with special courses where Loboda studied the piano and mastered the art of singing and conducting.

After finishing music school, Loboda continued her music studies. She entered the department of variety and jazz singing at the Kiev Variety and Circus Academy. During this time, she also became the band member of Cappuccino.

Similarly, she started a new band called Catch, which was her first professional experience as a composer and singer. Her song 'In the World' lasted for several months on the first line of the country's top charts.

Throughout her career, Loboda has maintained an impressive amount of earnings. Also, she perfectly manages her single motherhood. Her daughter Eva is a lovely girl. Likewise, she also has a second daughter named Tilda who is rumored to have named after German singer, Till Lindemann.

Talking about the 36-year-old Ukrainian singer's personal life, she is currently rumored to be dating the 56-year-old Till Lindemann, German singer, songwriter, and the lead vocalist of the band Rammstein.

However, Loboda is also rumored to have married in the past. She has two lovely daughters and is raising them single-handedly.

Svetlana Loboda previously dated a musical artist, Andrey Tsar. They began their romantic affair in 2009 and remained together as a couple till 2014. The former couple welcomed their daughter, Evangelina Tsar, on April 9, 2011. Sadly, the reason for their separation was personal differences.

Svetlana Loboda and Till Lindemann Relationship

In late 2017, Svetlana came into the spotlight after she was seen with Till Lindemann on various occasions. The couple attended several events together, and rumors speculate about their romantic affairs.

On May 23, 2018, Loboda gave birth to her second daughter named Tilda and media went to crazy to know about her father. After months of speculation about who is the father of her youngest daughter, Loboda revealed her relationship with Lindemann. And when asked about the father, she said:

"It seems to me that any woman wants Till to be a father of her child. I can say that he is an amazing man and just an incredible person. The whole world knows him as a singer. And it seems to me that the fact that my daughter's name is Tilda is already a big carte blanche in life".

On January 4, 2019, Loboda shared a picture with Lindemann where he was seen wearing a doctor's gown. She captioned the image wishing happy birthday to him. Meanwhile, Till likes to keep his romance with Loboda quite private.

Previously, Lindemann dated media personality Sophia Thomalla from April 2011 to November 2015. Their romantic affair was quite popular in the media at that time.

As of 2019, this beautiful singer known as Loboda has a net worth of $3.7 million. The primary source of her income is mostly singing and composing. Throughout her career, she has maintained a good amount of income.

How much is Svetlana Loboda's Income?

The exact information regarding Svetlana Loboda's income and salary is unknown, but her annual salary might be over $200,000. Well, she appears in music videos and tv shows as well.

As of 2019, the recent project of Loboda is not known but who knows she might have multiple projects lined up ahead. Hence, her net worth and income will increase in the coming future.

It seems that Loboda has a lavish lifestyle. Looking at her Instagram pictures, she travels in a private jet and visits exotic places for vacations.

Svetlana has a YouTube channel named LOBODA which has over 719k subscribers as of September 1, 2019. She joined YouTube on September 16, 2009, and currently, her channel has over 700 million views.