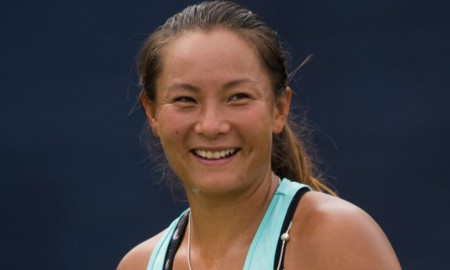 Tara Moore is a rising tennis player who was born in Hong Kong and currently plays for Britain. She has won nine singles and eleven doubles titles on the ITF Women's Circuit. Moore has played in the Australian Open, French Open, Wimbledon, and US Open.

Tara Bektas Moore was born on August 6, 1992, in Hong Kong, China. Her mother, Monet, encouraged her to play tennis at a young age. Hence, she started playing tennis at age 7. Further, her first professional match was in 2006 when she was 14. Apart from English, Tara speaks Chinese as well.

The 28-year-old Tara Moore is currently single, which means she doesn't have a boyfriend. The information about her past affairs is not available. Additionally, Moore hasn't shared is she had a romantic relationship before. She might be focused on her tennis career rather than spending time on romance.

Moore is a fun-loving and outgoing personality. When she is off the court, Moore loves to travel. Also, she spends her leisure time with friends and families. She has a pet dog named Pablo. Tara might soon find her partner, and we just have to wait to see her wedding.

While most celebrities like to flaunt their relationship on social media, some athletes prefer to keep their personal life secret. Like, Moore, another young tennis player, Jil Teichmann, is also single.

One of the best young players in her school, Tara Moore, has won $465,086 as prize money throughout her career. Therefore she might have an estimated net worth of at least $400,000 as of 2020. The details about her earnings are not known.

On average, the tennis players' earnings from tournaments range from $10,000-$85,000. Meanwhile, Serena Williams is still the highest-earning player. There is no doubt that players like Moore will earn more in the coming days, but that depends on her career winnings.

Apart from prize money, Moore earns a desirable sum of money from sponsorships and endorsements. Additionally, she appears in photoshoots and magazine covers. Moore owns a Mercedes Benz for her ride.

Moore's career saw a rise in 2016 when she won her first tournament in Antalya. Then she reached her first-ever WTA final with Conny Perrin.

The right-handed player plays for Great Britain, and she is determined to improve her tennis skills. Her current coach is Charles Homewood.

The global pandemic of COVID-19 has affected all professions, including sports. Amid the epidemic, Moore accused WTA of keeping secrecy. On June 11, 2020, she posted a open letter to WTA and ITF via Twitter.

Moore wrote about 2/3rd of players have been shut out of meetings between WTA officials and top players. She even called the dealings "insider trading."