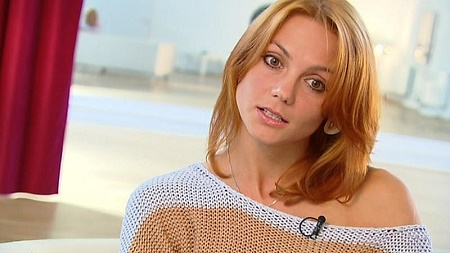 Dancers are athletes of God. They never get tired of dancing; in fact, they are so much passionate that they paint their dreams by own. So today's context is of German Dancer, Tatjana Kuschill.

Tatjana Kuschill was born on 24 August 1982 in Kazakhstan as Tanja Kuschill. As of 2019, she is 37 years old. Further, there is no information about her parents, siblings, early days, and academic qualification as well.

Kuschill is a professional dancer. She has been trained as a choreographic ballet master, and dance teacher and her dance partner was her former husband, Massimo since 2007. She joined the German Professional Dance Association (DPV) in August 2010. The couple opened dance studio together in September 2011 in near Augsburg. Since Sinató's split in August 2012, it has led Kuschill on its own.

In 2010, Tatjana Kuschil participated in the third season of RTL 's dance show Let's Dance. Her dance partner was actor Mathieu Carriere, but the dance pair retired in the second broadcast.

Tanja is presently intensively training in Königsbrunn for the Königscup. With more than 600 attendees and nearly 1,000 spectators, she conducted this dance event for the first time last year. Further, Tatjana's dance school keeps driving her with zeal, and she is planning fresh classes and dance styles in the autumn for her about 400 dance learners.

In the year 2007 to 2010, Tanja was in the Bavarian champion S-Latin with  Massimo Sinato. In addition, she and her former husband won the IDSF World Ranking Tournament in Spain in 2009.

Now, speaking about the marriage connection of this lovely dance couple, they are no longer together. Well, the former couple tied the wedding knot on June 2011.

Well, the couple met the first eachother in during the dance competition, and they fell in love with eachother. As a couple, Kuschill and Sinato also opened a dance school in Konigsbrunn near Augsburg. Also, the pair won the IDSF World Ranking Tournament in Spain in 2009.

Further, the former couple do not share children together, and there are no rumors or conflicts over their connection.

Sadly, the beautiful and lovely couple couldn't last long, after they started to face personal problems. In 2012, the couple divorced after one year of nuptials relationship and Kuschill left the studio as well.

A few months after the divorce, her former partner Sinato married to his dance partner as a second wife, Rebecca Mir. They exchanged the wedding vows on 27th June 2015 in Sicily, Italy. And, Tatjana even wished her ex-husband and his wife, Mir.

" I want to wish Massimo and Rebecca all the best . I have no grudge or similar negative feelings or no feelings for him or this relationship. Honestly, he does not care about me. I am very happily in love for some time now and am fortunate enough to have a very loving and responsible man by my side. "

Clearly, it swipes to her ex, to whom she has no contact anymore.

Is Tatjana currently dating anyone after the divorce with Massimo?

Yes, Tatjana also found a new partner. The 37-year-old dancer says it took a long time to trust someone again. She once stated:

"Whether it's the love of life, will show,  because just everything has yet to find,"

As per some sources, Kuschill's new partner is also a dancer and many European and World Champion of the Latin Amateur. Likewise, he has been a successful coach for years, running his own dance academy.

As we go through her Facebook, she has several pictures along with her husband. As can be seen, she is happily living in a marital relationship. Tatjana even shares a child with her wedded partner. However, the identification of her spouse and children has not been disclosed.

As of 2019, the exact amount of Tatjana Kuschill's Net Worth is under review. But we can assume, she might be collected a good amount of money throughout her profession as a dancer. Similarly, her income, paycheck, earnings, salary, etc. are only up to her.