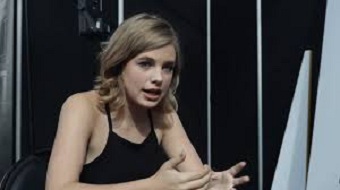 Who is Teagan Croft?

Teagan Croft is an Australian actress, well known for her appearance in the Sci-fi series titled The Osiris Child. She is also popular for her portrayal in the television series Titans as Raven. The show is aired via DC Universe.

In addition, Croft gained more fame after her portrayal as Bella Loneragan in Home and Away.

Teagan was born on 22 April 2004, in New South Wales. Born to the Australian parents Tim Croft and Rebecca McNamee Croft, she holds an Australian nationality and belongs to white ethnicity.

The young talented actress has two sisters. The younger sister's name is Aubrey Croft, whereas her elder sister's name and details are not available. As a teenager, she must be attending college for studies but it is not revealed yet.

Croft started her acting career at the early age of nine, portraying as a part of Scout Finch in the movie To Kill a Mockingbird. In 2016, Teagan made her appearance in the movie The Osiris Child and gained huge fame.

The following year, she appeared as Raven in the DC Universe series Titans. The series was premiered on 12th October 2018.

Is Teagan Croft single or in a relationship? Know about her affairs

Besides, she has an immense love for books and spends most of her time reading. Moreover, Croft also writes her own songs, and she is very much focused on her acting career.

Teagan is active on social media like snapchat and Instagram, where she has more than 213k followers. She also shares pictures expressing her immense love to her mother and sisters.

Teagan Croft's Net Worth and Salary

Teagan earns a decent amount of money from her career as an actress. She has quite a portrayals in movies and TV series till date. Even with the fewer movies credit, she has amassed a lucrative amount of wealth.

Being still active in the industry, her net worth is surely in ascending order. However, the exact figure of her total amassed assets is still under review.

Being a young actress, Croft makes around $15 thousand every month on average. Hence, she is living a rich and standard celebrity life along with her family members. Seems he spends quite a cash in order to maintain such a lifestyle.

The young and beautiful Australian actress is concerned when maintaining her body. Looking at her body features, she stands at a height of 1.62 meters / 5 feet 4 inches and weighs 99lbs / 45kg. Similarly, Croft has dark blonde hair and a set of blue eyes.