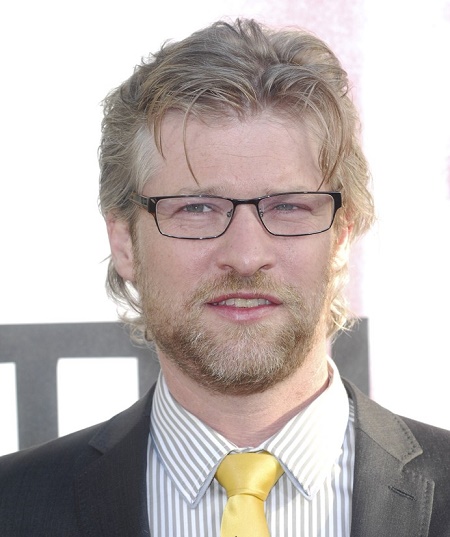 Todd Lowe is an American actor and musician who gained worldwide popularity for his role as Terry Bellefleur on HBO's TV series, True Blood from 2008 to 2014. Also, he is also best known for appearing as Zack Van Gerbig on Gilmore Girls (2002–07)  and as Agent Chad Dunham on NCIS (2009).

He was born on May 10, 1977, in Houston, Texas, the United States to the parents, Dan Lee and Bridget Ellen Lowe. He holds American citizenship and is of white ethnicity. Lowe attended Kingwood High School. Later he enrolled his graduation from The University of Texas at Austin with a Bachelor of Fine Arts degree in 1999.

As of now, Todd, 48, is still unmarried and therefore has no wife as well. He may be quite successful in his work, but he keeps most of his private things away from the media or the spotlight.

But once Lowe mentioned his ex-girlfriend Sasha is a good dancer and she personally choreographs. He also added that he brings her hot friends to dance to his songs that she is wonderful. But other information about their love romance remains private. It seems they are no more together.

Now, Todd, the 180.3 cm tall enjoying his single life rather than focusing on dating girls Further, he has one dog named Gaia. On the other hand, he is a very good friend of American screenwriter, Pamela Ribon, who was married to Stephen Falk (m. 2004–2009), Jason W. Upton.

Todd Lowe is a well known American actor who has a whopping net worth of $2 Million, which is similar to Tom Schwartz and Freddie Stroma. He has collected this hefty sum of money from his successful career as a film and TV actor as featuring in various hits TV series and films.

In the U.S., a TV star typically makes an average salary of $45,357 in a year. So his annual salary is also valued to be over $40, 000 for his appearances. However, his starred 2000 film Where the Heart Is Grossed $40 million at the box office while his hit film The Princess Diaries has gained over $165.3 million worldwide.

More to that, Lowe is also making a good amount of fortune as the singer and guitarist of  Los Angeles-based country-rock band Pilbilly Knights. In Jan. 2007, they released a compact disc, California Nigth Club (sic). Also, he is a member of another rock country band, The LA Hootenanny.

To now, Todd has appeared in different television shows and films. Likewise, he made his first TV debut by featuring television series, Walker, Texas Ranger in 1997. Since then, he has played in various TV series like Gilmore Girls, Without a Trace, CSI: Miami, Bunheads, Criminal Minds, Shooter, etc.

However, Lowe is famous for starring as Terry Bellefleur, a PTSD-suffering Iraq War veteran on HBO’s True Blood. Similarly, some of his films credits include The Princess Diaries, The Remains, My Dinner with Jimi, etc.

Asides film and television, he has featured in more than twenty stage productions like Three Cuckolds(1995), A Saga of Billy the Kid (1997), and Pot Mom (2006). Also, he worked on various plays written by playwright Justin Tanner.