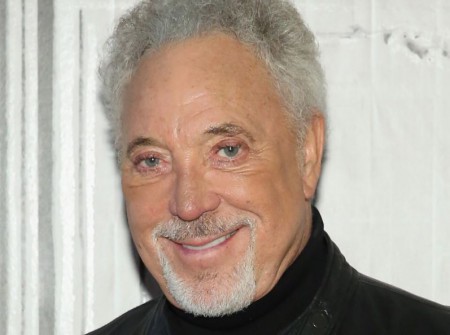 Widely-popular singer, Tom Jones is well known for his vibrant, lifting baritone voice that mesmerizes millions of people. Throughout his career, he received a Grammy Award, an MTV Music Award, and two Brit Awards. He is currently on a musical tour with his band, performing in 39 shows in 17 countries.

Jones was born Thomas John Woodward on 7th June 1940, in Treforest, Pontypridd, Glamorgan, Wales to Thomas Woodward, a coal miner and Freda Jones, a homemaker. He is Welsh by nationality and belongs to white ethnic background/race. Let's take a glimpse of Jones' personal life.

The Welsh singer, Tom is currently single and lives a simple life. But in the past, he dated various ladies and once married to a woman. Nevertheless, he is now working profoundly with his musical band after experiencing many heartbroken.

Previously it was rumored that Jones was dating an American actress and businesswoman, Priscilla Presley in 2017. The two were also seen several times, spending joyful moments together.

The duo is also spotted going for a candle-light dinner at the Hollywood restaurant situated in London, driving in a Rolls-Royce, which made their fans questions about their relationship. Nevertheless, the rumors turned out to be fake after Priscilla first proclaimed that they're not dating, and further Jones also said the same words. They also said they are just goods friends and nothing more than that.

The 79-year-old singer, Jones, was once committed to the first lady of his life, Melinda Rose Trenchard (Also recognized as Linda). The two tied the knot on 2nd March 1957, where they invited most of their friends and family relatives.

Well, the couple met for the first time while studying at Wood Road Infants School. Shortly they interacted and later began to date for a while. At that time, they both were 16-year-old.

Tom further faced several problems during his teenage time when he married Linda and started to work in a glove factory and various construction works. During his struggling time, he and his wife welcomed a lovely son, Mark Woodward on 11th April 1957, who's also featured in the TV documentary, Imagine in 2010.

The duo also had some problems in their marital relationship but, they stayed married despite their infidelities.

But, their bond did not last long after Linda was diagnosed with cancer. Sadly, she left the word on 10th April 2016 after a fierce battle with cancer at Cedars Sinai Hospital in Los Angeles, California.

The singing sensation, Tom, was involved in numbers of relationships. During an interview with The Daily Telegraph, Jones proclaimed that he had linked into sexual relationships with his overall 250 young female fans.

More to that, Jones also dated several high-profile women as well. He was first involved in a relationship with Mary Wilson, who's a member of an American female singing group, The Supremes in 1967. Unfortunately, they separated after dating for three years.

After the breakup, Tom started his affair with an actress, Marjorie Wallace, who won the title of Miss Word as the first woman of the United States in 1973. But, their relationship didn't last long, and they split soon.

During the late-1970s, the star began dating an American TV host, Charlotte Laws (also known as Missy Laws), who's the mother of Kayla Laws. Nonetheless, they ended their relationship in 1981 after dating for four years.

Jones then met an American model, Katherine Berkery on the musical tour in the US in 1987. The duo shortly started dating from October 1987 and, however, split up in 1989. Later, it was found that Berkery was pregnant, but Tom denied to be the father of the kid.

After testing DNA during the legal battle between Jones and Katherine, the court found that Tom is the child's father. But, he refused to take the court's statement until he finally claimed himself a father to Katherine's son. Might be due to those reasons, Tom doesn't show interest in meeting his son, Jonathan Berkery.

It was later found out that Tom was in a relationship with Mistress of the Dark actress, Cassandra Peterson. In an interview with Blender magazine, Cassandra disclosed that she lost her virginity to Jones when they're dating.

Check out the trailer of Tom Jones 2019 Tour

During the time between the 1960s, Tom had a television variety show, This Is Tom Jones, which became one of the most popular shows of the 90s. According to Associated Television-producers, Tom earned $9 Million a year over the decades years which is expected to be in a total of $55,700,000 in 2018.

The popular singer, Tom, bought a house at $2.87 Million (£2.6 Million) located in Cowbridge, Wales. But, he and his wife, Linda sold their accommodation to actor Nicolas Cage in 1998, which consists of five bedrooms, four and a half bathrooms on 4,345 square feet. Later, he moved to Los Angeles, California.

Jones later bought a house in Beverly Hills, California, at $2.65 Million in 1998, which features five bedrooms and seven bathrooms on 8,146 square feet. It also consists of a swimming pool, a spa, French doors with balconies, roomy sitting area with fireplace, a floor-to-ceiling bookcase, and a dining room for the family.

A Book About Tom's Life

Tom Jones is one of the most promising legendary singers in the field of music. His autobiography, Over the Top and Black: The Autobiography, was written by Michael Joseph on 1st November 2016. In this book, the writer shows Jones' whole life experiences and six decades of his musical journey to success.