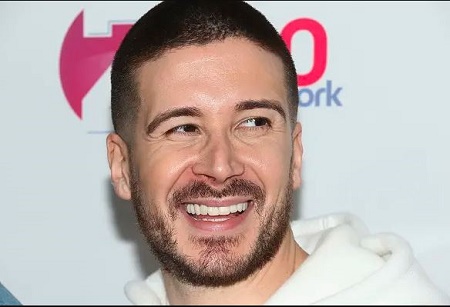 Did you watch the American reality television MTV's series, Jersey Shore, that ran from December 3, 2009, to December 20, 2012? If yes Vinny Guadagnino is not a new name for you who starred as the main cast member in all six seasons of the show. Besides this TV show, the American reality TV star and actor works as a  founder of a clothing brand called IHAV.

Vincent J. Guadagnino was born on November 11, 1987, in Staten Island, New York, United States. His mother, Paola, has been part of Jersey Shore but his father never wants to be part of the world of reality TV. Further, he has two siblings named Antonella Guadagnino, and Mariann Guadagnino. He holds American citizenship and is of Italian-American ethnicity.

Does Vinny Guadagnino Have Girlfriend Now?

The 32 years old Guadagnino is an unmarried man so there is no chance of having a wife. At the current moments, he has not revealed any of his current love affairs to the media. So, it is still not known whether he is dating anyone or not.

Nonetheless, on June 10, 2020, Vinny and Pauly D reunite at Double Shot at Love Season 2 Sneak Peek with some of their exes from last season with Derynn Paige, Maria Elizondo, Nikki Hall, etc. And everyone enjoys themselves completely at the Las Vegas bar.

But despite their somewhat rocky past, Elizondo, 23, finds herself once more attracted to Vinny. And when she sees him flirting through the dance floor with girls, she can't help but feel a bit jealous. "It feels so weird to be around Vinny again," she said.

But, until now, Guadagnino has not openly spoken out about this matter to the media.

In the past, Vinny has been in a romantic relationship with Elicea Shyann. They started dating in 2018 throughout the filming of Jersey Shore: Family Reunion. But Unfortunately, after a few months of love romance, they called it quits in April 2018.

Guadagnino said that long distance was to a big factor behind their failed relationship as Elicea lives in California and he is in New York. He stated: “It’s just too hard to keep up. I don’t regret anything. I really care about the girl."

After the breakup, the Jersey Shore started new chemistry at the end of the first season, by choosing Alysse Joyner, 24. But again they split in 2019 because of their distance. After filming for five months they were not allowed to see each other publicly until the final aired.

“Very weird situation to be put in after the finale. I struggled to keep it alive through text. Still think she’s amazing. Wish her the best", Vinny once Twitted.

How much is Vinny Guadagnino's net worth?

As of early June 2020, Vinny Guadagnino has a stunning net worth of $3 Million. He credits most of his earnings to his career as a reality TV star and actor. Also, he is making a decent amount from his clothing brands including Name Brand NYC and IHAV.