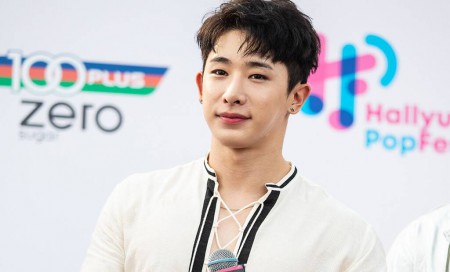 Body and Relation Status of Wonho

The 26-year-old, Wonho, is a famous South Korean pop singer who is best known for being part of the hip hop boy group, Monsta X. He was the group's lead vocalist and visual. However, Wonho left the group on October 31, 2019, after actress and his rumored ex-girlfriend, Jung Da-eun made accusations of owning her money and smoking marijuana in 2013.

The boy group was former by Starship Entertainment as a result of the tv show 'No Mercy' on Mnet. They also appeared at KCON from 2015 to 2017. Now, let's know all the details about the young star who has been struggling with his career over the past few months.

Is Wonho Single Or Is He Dating Someone?

Wonho, whose original name is Shin Hoseok or Lee Hoseok, is probably living a single life. He doesn't have a girlfriend as of now and is not dating as well. With controversies surrounding near past months, Wonho is focusing on his professional career at the moment.

Previously, Wonho was linked with a few female celebrities and was reported to be dating some beautiful ladies. Speaking about his love life, Wonho hasn't revealed anything about his relationship status.

When asked about his ideal woman type, Wonho said that he likes brunette girls who like to cook ramen and girls who have a straightforward personality.

On January 12, 2016, Dj Lee Kuk Ju of SBS Power FM's show "Lee Kuk Ju's Young Street" asked the members of MONSTA X about the type of girl they want to marry. Wonho said that he had no interest in marriage and declared his singlehood during the show.

Wonho dated an ulzzang girl named Seo Ji Hye during his pre-debut period. The term ulzzang means the best face in Korean. Hye has other nicknames, such as Mimi and Hyennie.

Seo is roughly a year younger than Wonho, and she is currently working as a model. The former couple has ended their relationship, but the exact date is unknown.

Wonho is said to have dated fellow Ulzzang Shidae Jung Da-eun before debuting in Monsta X. As per netizens, Wonho dated Jung as a cover-up, but at the time, rumors were surrounding about Jung's sexuality.

The detail information about Wonho and Jung's romantic history is not known. All the statements about their relationship could be merely rumors. Also, Wonho hasn't shared anything about his affair with Da-eun.

Wonho hasn't revealed his actual income and earnings, but some sources claim that he might have a net worth of over $5 million as of 2019. The primary source of his wealth comes from his career as a singer. He was the lead vocalist and visual of the South Korean boy group MONSTA X since 2015 but left the group after Jung Da-eun made recent accusations.

As of November 2019, the group is composed of six members: Shownu, Minhyuk, Kihyun, Hyungwon, Joohoney, and I.M. Wonho, the former member departed from the group following allegations on October 31, 2019.

Some of the famous South Korean celebrities who have an impressive net worth are Kim Tae-Hee and Lee Min-Ho.

Why Jung Da-eun Changed From Female To Male?

Jung's revealed that her ex-girlfriend, who was 12 years older than Jung, told her to get male hormone injections so that they can get married.

As of now, Jung is romantically involved with actress, Han Seo Hee. Together, they lashed out at Wonho, criticizing his career and making allegations.

On October 29, 2019, Jung Da-eun, who co-starred with Wonho on comedy tv's variety show 'Ulzzang Shidae' posted a photo of Wonho on her Instagram with a caption:

"Ho Seok (Wonho's original name), when are you goign to pay me back?"

In the post, Jung's current girlfriend, Han Seo Hee, commented, "Give Da-eun her 30 million won (approximately $35,700)." As per Da-eun, Wonho borrowed money and stole her things to sell online.

On October 30, 2019, Starship entertainment responded to the accusations saying: "The rumor is not true and we are looking into the possibility of taking legal actions."

Additionally, Jung Da-eun even shared chat logs with Wonho's lawyer. Han Seo Hee then followed up with tweets on Da-eun's account, accusing Wonho of having been served time in juvie.

On November 4, 2019, former idol trainee Han Seo Hee went live via her Instagram along with her girlfriend, Jung Da-eun. Immediately, Wonho's fans flocked to her Instagram live to vent their anger toward the couple. Supporters of former MONSTA X even called the couple attention seekers.

Da-eun said that if she was an attention seeker, she would've debuted as a singer like Wonho. Also, when fans told her to explain, Da-eun claimed:

"You guys hate me, right? But Wonho and I have the same personality. So he and I are on the same level." Han Seo Hee then objected to this, to which Jung Da Eun added on, "Actually, I'm a little bit better [than Wonho]. What talent does he have? Dancing? You call that dance? Boo! You call that singing? No."

Jung accused Wonho that he stole and sold her Balmain silver jeans, Bang and Olufsen earphones, and Canon 420D camera. She said he had smoked marijuana with her in 2013 as well. Afterward, Wonho released an official statement through his agency with a handwritten letter of apology.

Wonho has issued an apology over his immature moments and faults and vowed to reflect on his past behavior. His agency, Starship entertainment, terminated the contract after he was said to have taken drugs and money from Da-eun. After such accusations, Wonho left his boy group, MONSTA X.

However, fans of the 26-year-old singer are boosting up the fight to get him reinstated to the group. His fans appealed Starship Entertainment to give him a second chance, and around 300 of them turned up at midnight on November 3, 2019, for a sit-in to express their displeasure.

This article aims to provide full information about Wonho, a popular South Korean singer and former member of the boy group, MONSTA X. Follow marriedceleb to know about your favorite star.