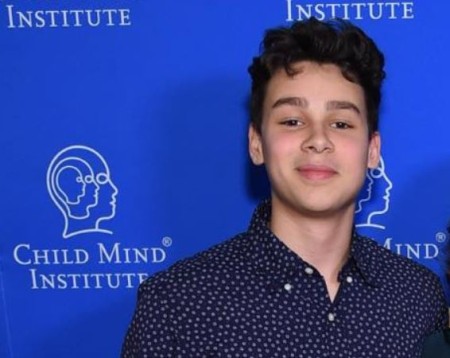 If you're familiar with the name of Elizabeth Vargas, who's one of the most prominent journalists in the field of news then, you might know the name of her son, Zachary Raphael Cohn. Furthermore, his mother, Elizabeth frequently appears on the TV documentary series, The Untold Story.

Cohn was born on 31st January 2003, in the United States of America. At the time of birth, he weighed 7 lbs, 9 oz. Moreover, he belongs to the mixed ethnicity background (Peurto Rican-Irish-American). Find out more about Cohn's personal life in the below.

Cohn's guardians, Elizabeth Vargas and Marc Cohn married on 20th July 2002 at the Council on Foreign Relations on the Upper East Side, New York City, New York. Their marriage was a Jewish-Catholic ceremony where Vargas wore a Vera Wang Strapless dress with cantaloupe-colored canopy, and Marc was dressed in a black tuxedo with a rose on his left pocket.

At that time, the pair invited many of their friends like Bryant Gumbel, Jackson Browne, Leonard Lauder, Matt Lauer and his wife, Annette Roque Lauer. Similarly, Some other celebrities like Carly Simon and her son, Ben Taylor have also attended their wedding ceremony. While there, Carly wore sunglasses and a white dress, and her son, Ben was dressed in fitting wedding clothes.

After eating the dinner, the wedding guests held in a small library where there were lighted candles for a musical performance by the bridegroom. During the stage, Marc performed a song, One Safe Place, which he wrote and composed for Elizabeth before they met. Later the duo made a campfire with their guests and even sang a beautiful song, which made the best day for the married couple.

How Did The Couple First Met?

Zachary's parents had their first encounter at the United States Open in Queens, New York, in 1998. Shortly after the men's singles semifinals, Elizabeth interviewed former professional tennis player, Andre Agassi, who's a good friend of Marc.

The next day, Agassi won the match and reached the finals where Cohn was waiting for him on the locker room. Further, he saw Elizabeth, who's correspondent for ABC News, and shortly, they had a lovely conversation where Marc complimented for her wonderful interview with Agassi.

During the men's tennis finals, Marc and Elizabeth seated on the opposite sides of the court and eventually found themselves looking at each other rather than concentrating on the match. At one time, Marc asked her to wear his coat because there was cold.

After the match, Cohn dial ed Vargas' phone number and told her about his intimate life and often said he wasn't dating anyone at all. He also asked her for dinner in her Upper East Side rooftop. During the dinner, they discussed politics, a French novelist, Marcel Proust, song lyrics, and religion.

The couple shortly started dating after knowing each other's lives. Marc later proposed her for marriage over the Hudson River bridge in April 2002. With so much happiness in the face, Elizabeth approved his proposal, and they got united as husband and wife.

The soulmates welcomed two children, Zachery, in 2003. Three years later, the duo proclaimed that they're going to share their second child in 2006.

They further welcomed a lovely son, Samuel Wyatt Cohn on 16th August 2006, who weighed 7 lbs, 9 oz during the birth.

The duo lived a happy life for 12 years, but then they started having troubles in their lives. The pair later filed for divorce, citing irreconcilable differences on 20th August 2014. Later, the court finalized their divorce in late-2014 after Vargas came out from rehabilitation for alcoholism for the third time.

Zachary's dad, Marc was previously married to his wife, Jennifer George, who's fashion designer and co-owner of a women's sportswear manufacturing company, Jennifer George Inc, in New York. The duo tied the knot on 20th May 1988 at the bride's house in Stamford, Connecticut.

The couple's marriage won't last for long due to some misunderstandings and later divorced. After their divorce, Marc took the custody of their kids, Max (born in 1991) and Emily Cohn (born in 1995).

Cohn's dad, Marc maintains a hefty net worth of $14 Million as of 2019. He maintains impressive earnings from his profession. According to Salary Expert, a singer-songwriter makes $71,933 as an annual salary in the United States.

Check out the trailer of LIFE

Meanwhile, Zachary's mom, Elizabeth has a net value of $6 Million and also featured in a blockbuster movie, Life as a 20/20 news reporter. Furthermore, the film grossed $30.2 Million in North America and $70.3 Million in other countries for a worldwide total of $100.5 Million with a production budget of $58 Million.

Thus, he don't have to worry for paying bills for now, as he is living a rich and affluent lifestyle on his parents prosperity just like other celebrity kids, Levi Hank Gilbert-Adler and Kai Knapp.

A Book Written by Cohn's Mother

Zachary's mother, Elizabeth wrote a book, Between Breaths: A Memoir of Panic and Addiction, where she reveals her alcohol addiction and anxiety disorder and the most uttering brave and honest moments. The book received 4 and a half out of 5 stars from 724 ratings from the readers.