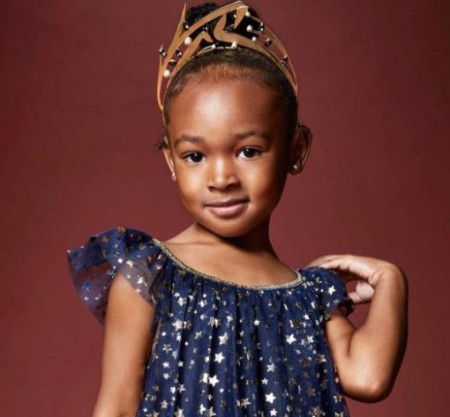 Who is Zhuri James?

Before beginning our topic let's start with one simple question. Who is the current highest paid NBA player? You must have guessed that right. Yes, it's the great LeBron James. As of 2019, he is the richest basketball player having a gigantic net worth of $440 Million. Apart from having a wonderful career, James is also an excellent father to three adorable kids. And today we are going to talk about the third child, Zhuri James who is the only daughter of James till date. For your information some of the famous celebrity children are Brooklyn Rose Orton, Ella Bleu Travolta, Jodie Fletcher, etc.

The baby girl, Zhuri James is the daughter of LeBron James and his wife, Savannah James (Brinson). Obviously, she is the celebrity child and she has the wonderful personal life. So, let's know some details about the lovely child, Zhuri James.

Zhuri James was born as Zhuri Nova James on October 22, 2014, in Ohio, United States. Her parents are LeBron James, a superstar NBA player and Savannah Brinson James, a businesswoman and philanthropist. As of 2019, Zhuri's age is just 4 years old and her birth sign is Libra. Her name Zhuri is of Swahili origin and means beautiful.

Zhuri is the third child and only daughter of the James family. She has two older siblings, Lebron James Jr. aka Bronny James (15) and Bryce Maximus James (12). Zhuri is an American by nationality and belongs to the African-American ethnicity. Currently, she resides in Los Angeles with her family in a luxurious mansion.

As mentioned earlier, Zhuri is the third child and only daughter of Lebron and his wife Savannah James. So, how did they meet? When did they get married?

James and Savannah are high school sweethearts. After a few years of dating, James proposed to Brinson at New Year's Eve party on December 31, 2011. The couple married on September 14, 2013, in San Diego, California. Their wedding ceremony was attended by 200 guests which included their family members and relatives. The lavish wedding celebration ran for three days.

Brinson and James welcomed their first child, a baby boy named LeBron James Jr. aka Bronny James in 2004. At that time, Savannah was in high school. After three years their second son named Bryce Maximus James was born. Their only daughter and the third child named Ahuri James was born in 2014.

As of now, the James family resides in Los Angeles, California in a luxurious mansion.

Zhuri as a child enjoys her parents net worth. Let's begin with her mother. Well, Savannah Brinson has a net worth of $1 Million as of 2019. She started a furniture line with American Signature called Home Court. Further, she also owned a juice store, The Juice Shop in Brickell, Florida but closed in 2016. She is working with an event named I PROMise Makeover.

On the other hand, Zhuri's father, LeBron James has a huge net worth of $440 Million. He is a professional NBA player, who earns through his basketball career. For the 2018-2019 season, his salary is reported around $35.6 Million from his present club Los Angeles lakers.

Recently, in 2019, LeBron James became the highest-paid player in the NBA. Now in his 16th season with the league, James’ earnings for the 2018-2019 season total $88.7 Million, according to Forbes. The total net worth of LeBron includes salary, bonuses, endorsements deal, and properties.

Lebron has three large homes including two in LA and one in Ohio. In December 2017, he purchased a luxurious mansion for $23 Million in LA. Similarly, his other home in LA is located in Brentwood which cost around $21 Million. Further, James paid $2.1 Million for the 30,000 square foot mansion in Ohio.

As a child, Zhuri has a normal height and weight.

Zhuri has an Instagram account which may be handled  by second person. As of July 29, 2019, she has over 6k followers.